Photos From the Fayre

Not as many photos as there might have been because I spent too much time nattering with people.
I still can't get over the fact that living back in Mid Suffolk means I know more people than I ever got to know from 23 years at Knodishall! Of course it helps that Colin lived in the village before we were married and his Brother still lives there and of course I was Cub Scout leader here for nearly 20 years.

In the Show Marquee............
Flower arrangement...............WI Members only theme "Keep the Home Fires Burning" I'd love to be able to arrange flowers like this but would never have enough flowers of my own and buying flowers would go against the grain. 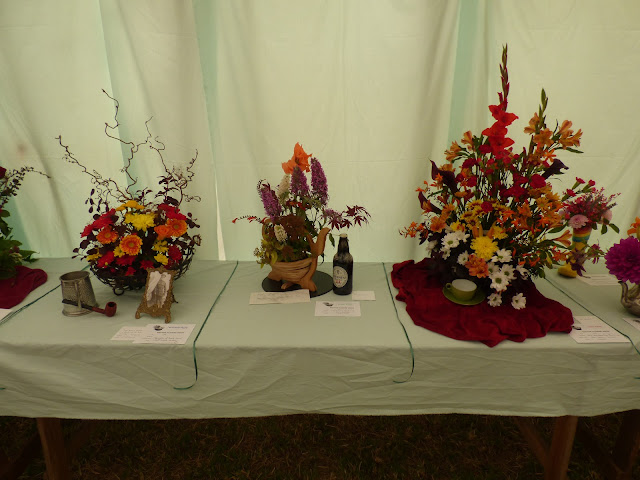 The WI Members only Marble cake, mine is back right. Sad to see only 3 entries 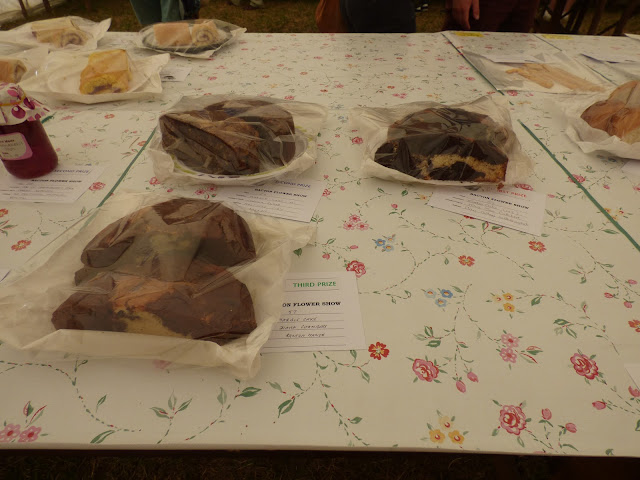 The WI stand, selling cakes and produce, such a shame so few were donated (although this photo taken at the end of the day when most had sold). We decided that it had been too hot Friday to do much baking.
The lady selling hats on the next stall did well, she buys in the hats and then customises them with different trims 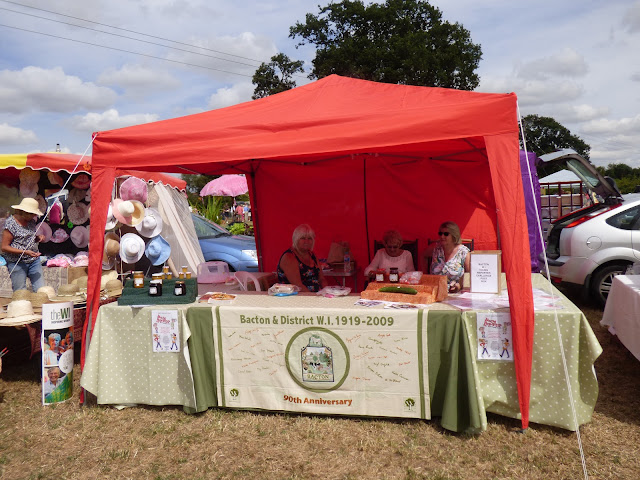 There were some classic cars to look at and this interesting old lorry. 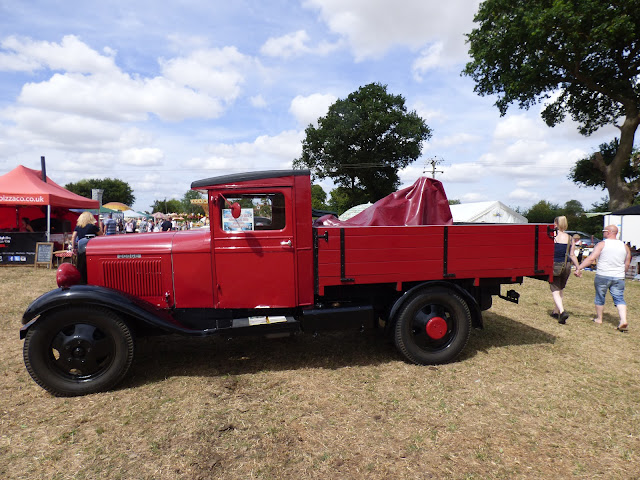 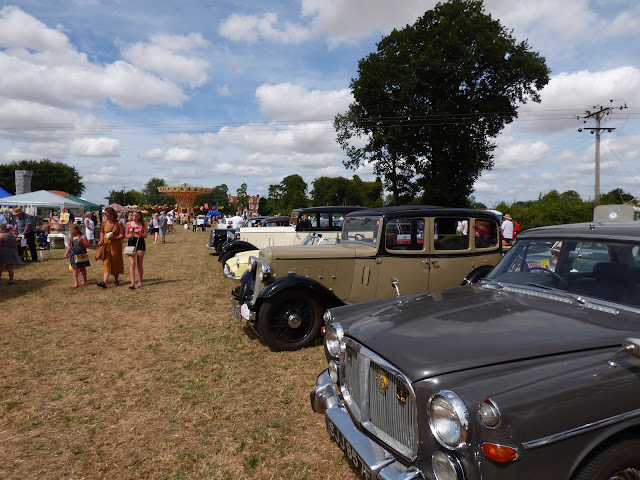 There was a small funfair with this vintage chair-o-plane,  all rides free thanks to sponsorship of a local long established car-sales business. They also sponsor lots of other things at the show. 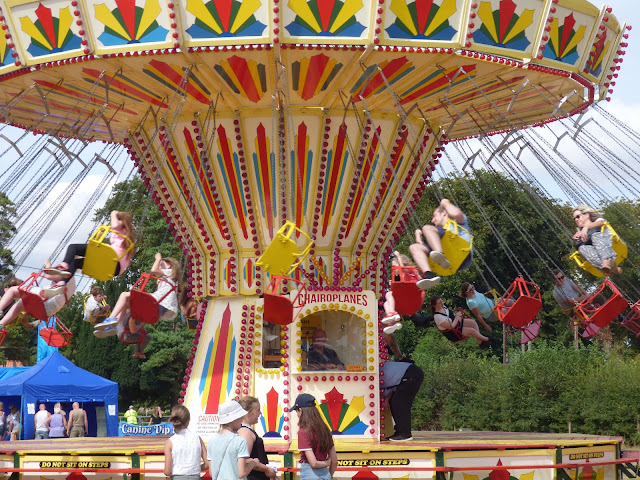 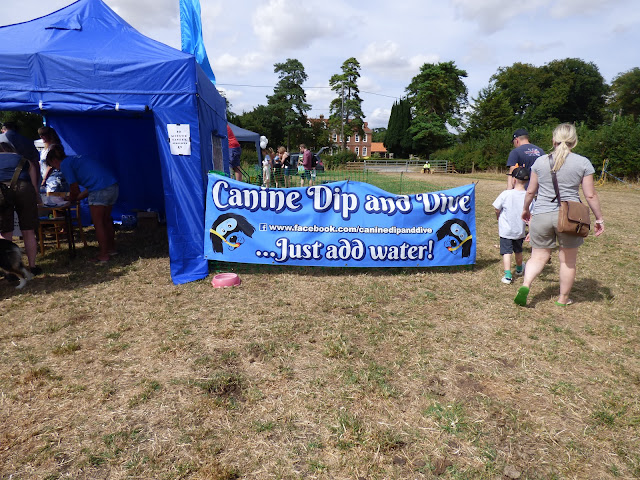 ............a swimming pool for dogs? Possibly a local business. It had lots of people looking but the two dogs that were in there when I looked were just trying to get out! 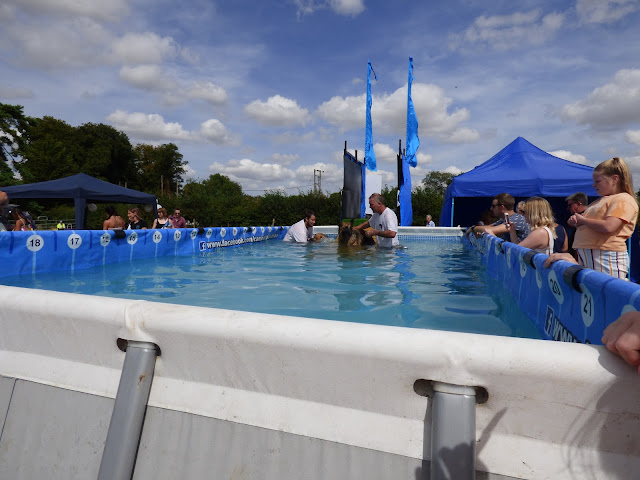 The Stowmarket concert band were brilliant as always. Do love a good brass band 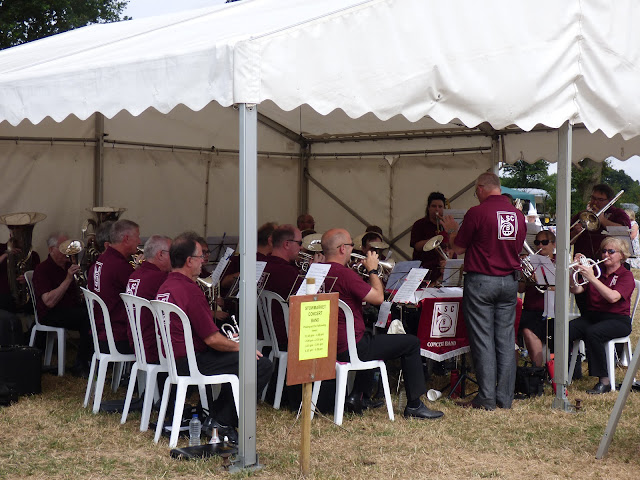 And the Stowmarket Boy's Brigade Marching Band were good too 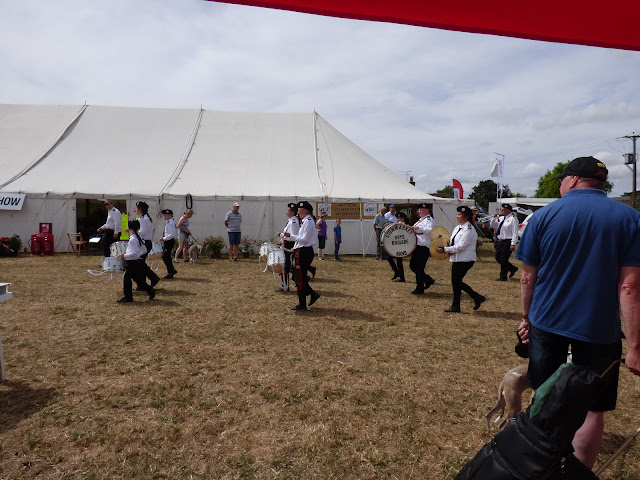 It was a hot day and the best place to be was under the shelter of the WI gazebo! which is why there are no photos of all the other happenings. The 6 parachutists landed exactly in the grand ring but no photos, there were children's races, children's magician, dog show, charity stalls but no photos . The Guides ran the tea tent and the Scouts doing burgers etc and no photos of them either!

The money raised is divided between the Stowmarket and District Lions Club who do a lot of the work organising the show and village charities and organsations.

Thanks to everyone for lovely comments yesterday and welcome to another follower.
In reply...............oh yes, the marble cake came home with me and most went in the freezer and the rest I'm eating and it's very tasty.
Well done to Gwen for being a show secretary for ten years, hope you find someone to take over.
To Patricia.......Yes it's so good to go in and see if the judges have stuck a sticker on your entry card.
To Jennie........yes I can imagine Banana Jam being given a funny look by the older people at the show. Strangely there was only a class for Strawberry Jam at this show, which I didn't enter because I'd forgotten I made some in June (memory failure is my worst symptom since Colin died).
I was a bit worried about the herb entry one day last week when I went in the greenhouse and found I must have forgotten to water the Basil the night before, luckily a good soak and it perked up. The Sage outside is looking extremely stressed, only a few bits left alive but Rosemary is enjoying the heat. I've been watering the parsley to keep it going as I'm using it in potato salad.
I entered the chutney class but forgot to put a date on the label to say when it was made so it wasn't even judged - I knew, according to RHS rules, it needed a date but forgot to write it on - Duh! ( Any date would have done!)
Elaine - Fear, lack of time or  apathy probably or maybe lack of knowledge of the rules of entering. In Knodishall they started putting the rules of each class on the form (tomatoes have to have their calyx etc etc) and that seemed to get more people entering.

Posted by Sue in Suffolk at 06:00
Email ThisBlogThis!Share to TwitterShare to FacebookShare to Pinterest
Labels: Bacton Fayre, Local Events