And this last week has seemed very long because of being sink-less. The sink bit is the first, longest and worst part of the kitchen to be done. The kitchen fitter man had to alter the pipework a bit and he also cut the new worktop so that it fitted better around a bit of pipe boxing whereas the old worktop hadn't - he's a bit of a perfectionist I've found, so seems to work very s..l..o..w..l..y. I've got a 1½ sink now - just the one before, and  two  extra cupboards underneath because the lady before us had a dishwasher which she took with her. I've never had one and didn't want one - just another thing to go wrong in my opinion. There were also some open corner shelves - dust collectors - now a cupboard with door. He's coming back at the end of next week to do some bits of tiling where there wasn't any before - luckily there were about 40 tiles in the garage, and to do the skirting and luckily again there was a bit of matching skirting board in the workshop.
Here it is, one third done and  my lovely new sink 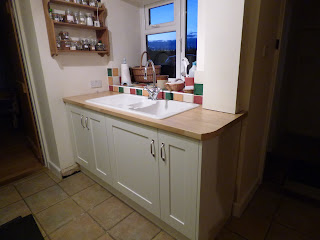 and he'll also come back sometime in the next month or so to do the next bit. ( My choice to have it done in stages to lessen the hassle a bit). Except the hassle continues next week because the plumbing company are coming to alter things in the downstairs bathroom and add the bath.
By the way this is what the units were like in the kitchen - missing kick boards and draw front and ancient worktops and mock wood doors. Leaking tap and very old stained sink in the bit that's been replaced. 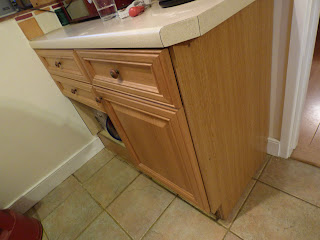 A week of good weather for working outside so  I've rescued the strawberry bed from the weeds and it doesn't look too bad,  thought  the plants were lost because of the drought but it looks as if most have survived. Wish I could say the same for the raspberry bed. Lots of the canes planted last year have died, they were planted in a hurry in poor soil just as Colin went into hospital for the donor stem cell transplant. Neglected for almost a year plus 3 months with no rain is not a good start for young canes. I've weeded and fed and cut them back and will see what happens next year. The ride-on mower came back on Wednesday afternoon. It wouldn't start when it was supposed to come back the Friday before, but the mechanic got it going after charging the battery again. The repair cost £70 but as they collected, checked the blade and cleaned the whole underneath bit as well as mending the steering arm before returning it, that's not  as much as I feared. Really must be more careful around the garden, don't want it to happen again.

Another job done while waiting to get back into the kitchen was painting my shabby chic plant ladder which was much more shabby than chic after 4 years standing outside. I searched the old blog to  find a picture of it at the smallholding when I first had the idea of doing it but couldn't find one. It's put it away for the winter and will be planted up with pots of something in spring.

I'm still doing some clearing of bits, just a little every day. OUT of the house this week

Another 2 bags of books to the charity shop
Another box of books to Ziffit  (£21 worth this time)
A bundle of old padded post bags pulled apart so they can be used to light the fire
An old solid tub of weatherproofing stuff that was here when we came.... from the garage into the dustbin
2 broken screwdrivers from the workshop into the dustbin
Some Christmas card making stuff has been turned into cards
More Christmas craft bits have gone into the car boot box

More good weather forecast for the weekend
Have a good one wherever you are.
Back Monday
Sue
Posted by Sue in Suffolk at 06:00
Email ThisBlogThis!Share to TwitterShare to FacebookShare to Pinterest
Labels: House and Home, Raspberries, Soft Fruit, The Garden