September  was the seventh month of the Roman calendar and the Anglo-Saxons called it 'gerst monarth' meaning Barley Month. The 1st of the month marks the start of meteorological autumn and the day length decreases by 1 hour and 53 minutes during the month. Astronomically, Autumn doesn't begin until the equinox on the 23rd.
The word autumn comes from Latin autumnus and it's use dates back to the C14. In the USA it is known as fall and both autumn and fall were used in this country back in the C17.


These are two of the September Pages from The Diary of a Country Lady, one of the traditional saying she mentions is  Fair on September 1st - fair for the month. I hope it's right. 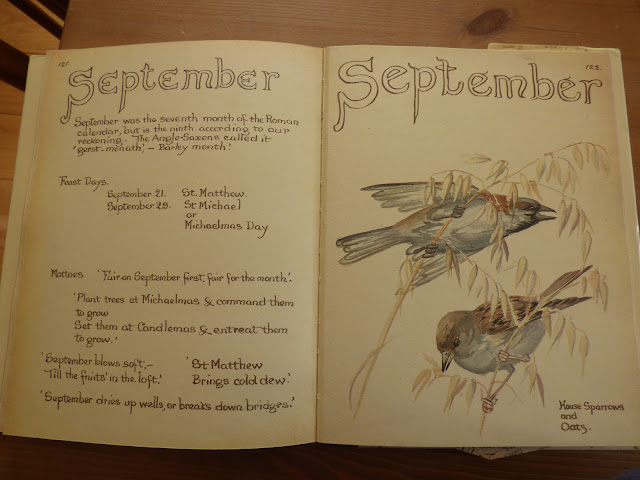 September was an important month in the past as it was the time for harvest and festivals to celebrate another successful growing year.


Hip! Hip! Hip! for the harvest home,
Now we've taken the last load home,
I ripped my shirt and I teared my skin,
To get my masters harvest in.

Great ceremony was always attached to the gathering of the last sheaf of corn, which was often used to make a corn dolly. This corn dolly would then be planted in the first furrow in the following spring to ensure a good crop.
Things have changed since the time when John Betjeman wrote 'Harvest Home', his version of the favourite harvest hymn. He said "We fire the fields for harvest, the hedges swell the flames".  I can remember when stubble fields were burned before being ploughed - smoke everywhere, now fields are more likely to be sprayed..........  just as nasty.

In medieval times tenants were given the right to gather firewood during the autumn or winter  " By hook or by crook". That means they could gather firewood but only using a shepherds crook and a billhook. No saws allowed.


From The Months poem by Sara Coleridge
Warm September brings the fruit,
Sportsmen then begin to shoot.

This old rhyme hopes for calm weather until the apples and pears were ready for harvest ........
September blow soft 'til the fruits in the loft

South wind on the 21st indicates that the rest of the autumn will be warm.

St. Matthew, shut up the bees

This refers to the traditional day for bee-hives to be closed down for the winter.

Most of the weather rhymes for September relate to St Michael's Day or Michaelmas, which is on the 29th. It was an important day in the farming calendar, the day for farm tenants to pay their rent or change jobs. I'll do a separate post about the day on the 29th.

Many, many thanks for so many comments yesterday. I think people ask if I'm planning to stay here just for something to say, it doesn't bother me.

Have a good weekend folks
Back Monday
Sue