Did you know September 3rd was traditionally known as Nutting Day? No, I didn't either, but came across this piece of information when I was looking through books for the September Days post on Saturday.
According to the book 'Cattern Cakes and Lace'.......this is the day on which children would traditionally go to the local wood to gather hazelnuts. All villages would have had local hazel coppices as the wood was so important for hurdles - no wire netting or electric fencing back then.

So what can I find out about hazelnuts (Corylus avellana). 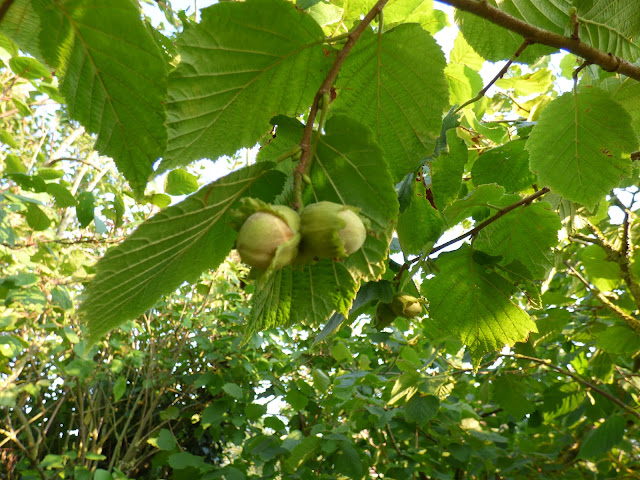 From a little book called 'Nature in Your Basket' by Richard Mabey..............
Pollen deposits suggest that between the retreat of the glaciers and the arrival of mature forest some 9,000 years ago, hazel was the commonest tree across much of Britain, and it must have been one of the most important sources of vegetable food for Stone Age hunter gatherers.

From the book 'Discovering the Folklore of Plants 'by Margaret Baker..............
The Celtic world treated hazel as a holy tree. Its nuts were connected with poetry, knowledge, love, fertility and childbirth. In the Scottish Highlands hazel was one of the nine sacred woods used in kindling needfire at Beltane. (Need-fire, or Wild-fire, a fire caused by friction is a term used in folklore to denote a superstition which survived in the Scottish Highlands until a recent date.)
Hazel is the wood often used for divining rods and  if you stir jam with a hazel stick the fairies will not steal it!
The nuts were given the names of potential husbands and thrown into the fire by young girls. The loudest bang as the nut exploded or brightest flame showed which man she would marry.

Apart from the well known use of coppiced hazel for hurdle making, it was also used for baskets and the bast or stringy inner bark could be used as a tying material. The wood was used for carved walking sticks and broom handles and the oil from the nuts could be used as a polish. The nuts can be ground and added to flour for a flavoured pastry and like almonds can be used to make milk.

I'd try these ideas for cooking with hazelnuts.......if only the squirrels didn't take them before I get a look in. 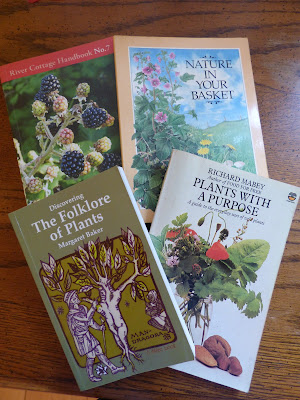 
Posted by Sue in Suffolk at 06:00
Email ThisBlogThis!Share to TwitterShare to FacebookShare to Pinterest
Labels: Folklore, Hazelnuts