Is it really 4 weeks since the mobile library was round? Yes 'fraid so.
8 books that I'd ordered on line were collected last week. So what treasures have I here today? 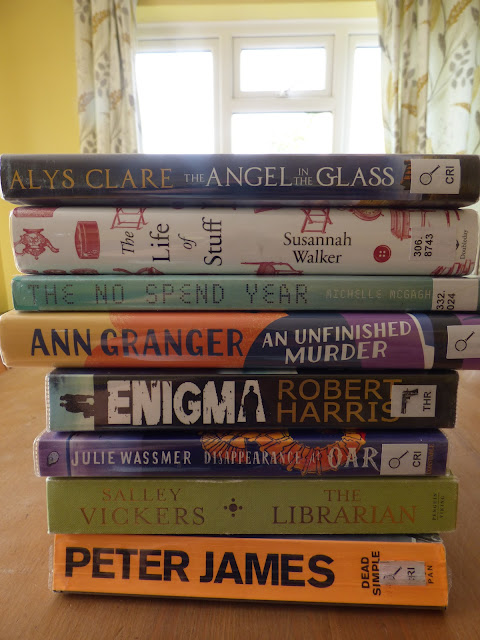 Two non-fiction on a similar theme ..........spending less on STUFF. Then 3 crime by favourite authors. The Librarian by Sally Vickers has been mentioned somewhere . I might have even borrowed it before and returned un-read. Not sure about the book by Robert Harris. I'll see. But the Peter James book has gone straight back on the returns pile as I've seen it before and it's much too nasty for me!
My top choice for the first to be read is the Alys Clare - I love her books.

How did I get on with the last lot from 4 weeks ago? 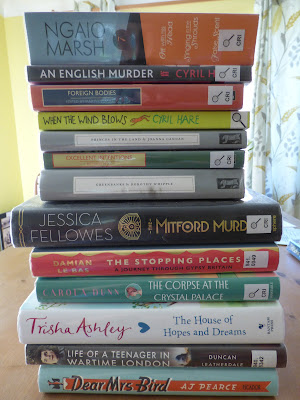 I wrote about two of these HERE but several others went back unread  including the two British Library Crime Classics. One was short crime stories translated from other languages...........too many difficult names and the other was just weird. I couldn't get into the Persephone reprint  by Joanna Cannan or The Mitford Murders. I've still got several here to read and I'm still having trouble concentrating on non-fiction. At the moment I'm part way through the Trisha Ashley at my second attempt - it starts with the death of a much loved partner and first attempt made me think..... maybe not  a good idea to read it, but I picked it up again the other day and got past the sad bit. I'm not sure about "Dear Mrs Bird" again I started it but couldn't decide if it was worth reading. I've kept it to try again. So 6 books were renewed for another month.

What with the dithering and the decorating I only read 4 books in August - which is the least read in a month ever!

Many thanks for comments yesterday.

Back Tomorrow
Sue
Posted by Sue in Suffolk at 06:00
Email ThisBlogThis!Share to TwitterShare to FacebookShare to Pinterest
Labels: Library book photo