Here are the books I collected from the Mobile Library this week. All except one are books I've ordered on line and collected. Once again most are crime fiction. 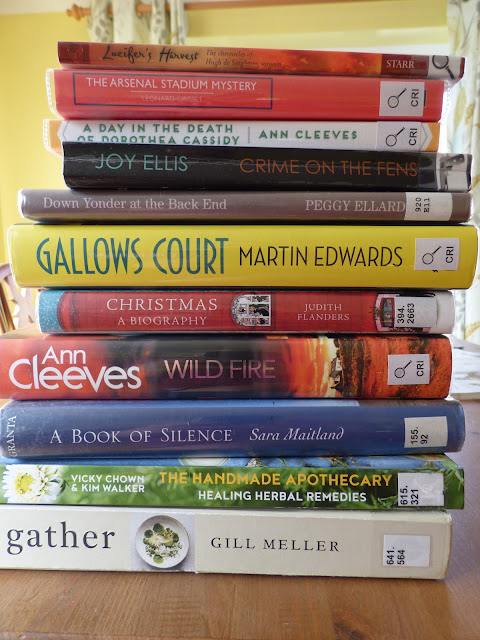 From the bottom upwards - Gather is a cookery book to browse. Gill Meller was one of the people who worked with Hugh Fearnley Whittingstall in the early days. The Handmade Apothecary is what it says on the spine! No idea where I got the idea for ordering the Book of Silence and also no idea what it's like yet. New crime by Ann Cleeves - it's her last in the Shetland series. A biography of Christmas - again  no idea. "Gallows Court" by Martin Edwards is the first in a new series by this author. I didn't like his Lake District Mystery series so not sure about this. I'll let you know. "Down Yonder at the Back End" is a small biography I took off the returned shelves on the van. "Crime on the Fens" by Joy Ellis a new to me author to try out. Another crime fiction by Ann Cleeves is a re-print from before she became well known with the Shetland and Vera books. Then another British Library Crime Classic reprint - The Arsenal Stadium Mystery by Leonard Gribble and the very slim volume on the top of the heap is Lucifer's House by Mel Starr, this is from a series of historical crime set in the 14C.
Which to read first, that is the question.


What did I read from last time? Below are the books picked up 4 weeks ago. They've all gone back to the library. The only one that went back completely un-read was the book by Peter James. I flicked through The New Spend Year but didn't bother to read it properly. The Life of Stuff isn't what I thought but  actually a memoir of the author, her mother and family and a type of depression that leads to extreme hoarding - an interesting read. All books I've read have been added to my Books Read 2018 page. 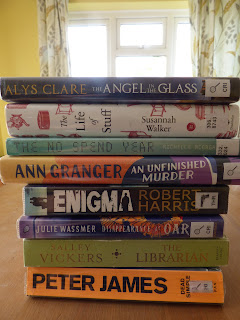 I've still got some non-fiction here from 8 weeks ago. I'm  preferring crime at the moment but I'll hang onto them a while longer just in case.

The downstairs bathroom is finally done so now I need to get out the paint again. It looks as if someone did a quick coat of white over blue sometime before we came here and I'm also going to grout the few tiles that the kitchen man fixed on the wall beside the new units. I wonder why that little bit was never finished, given that the tiles were in the garage all the time. He'll be back in about a month, maybe less, to do the second part of the kitchen replacement which is two wall cupboards above two cupboards. That gives me a bit of a break from Workmen and hopefully a chance to get out to some church visits etc.

Thanks for comments yesterday

Posted by Sue in Suffolk at 06:00
Email ThisBlogThis!Share to TwitterShare to FacebookShare to Pinterest
Labels: House and Home, Library book photo