29th September is Michaelmas, the equinox is past and autumn is really here. The autumn decorations were added to the mantel-piece after the chimney was swept but I forgot  to take a photo.
Much like last year except for the hare that came from the Suffolk Show in May and the brown jug and lantern from car boot sales this summer. The wooden fruit came from a car boot sale in 2017 . The only thing new was the leaf swag bought last year and safely stored away to use every autumn. 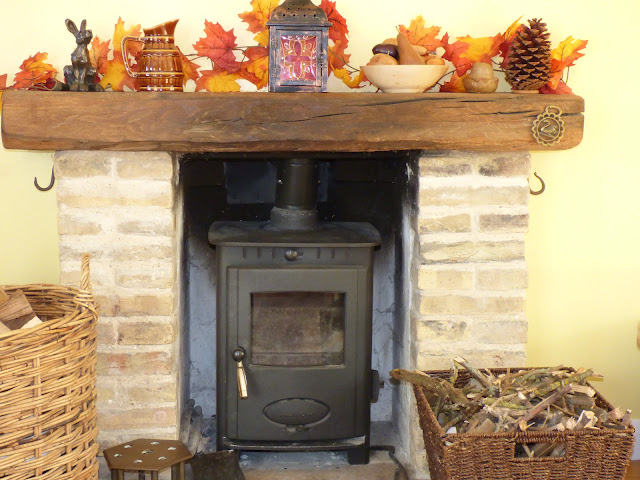 Michaelmas was an important day when farm rents were due, annual employment terms ended, local courts were held and children would finally go back to school after helping with the  harvests.

A couple of weather sayings for today

If St Michael brings many acorns, Christmas will cover the fields with snow

So many days old the moon is on Michaelmas Day, so many floods after.

A roast "stubble" goose - fattened from the barley gleanings on the fields after harvest =, used to be the traditional meal on this day and it was thought that eating goose on Michaelmas Day would bring financial prosperity in the year to come.


Whoever eats goose on Michaelmas day, Shall never lack money for his debts to pay

And when the tenants come to pay their quarter's rent,
They bring some fowl at midsummer, a dish of fish in Lent,
At Christmas a capon, at Michaelmas a goose,
And somewhat else at New-year's tide, for fear their lease fly loose .


Goose Fairs used to be held on this day and geese were walked to the famous fairs. There is a record dating from the C16, of over twenty thousand geese being walked to Nottingham goose fair from Lincolnshire and Norfolk. Their feet were prepared for the long walk by being coated by with a mixture of tar and sand.


In one of my books it says that Michaelmas day is the last day that blackberries should be picked. It is said that when St Michael threw Lucifer, the devil, from heaven, he fell from the skies and landed in a blackberry bush making the fruit useless.
BUT in another book this story is given for October 10th, this anomaly will be due to the change of calendar when 12 days were lost. In reality it probably depends on the weather and how damp it's been to make the blackberries mouldy.

Have a lovely weekend everyone............. the forecast is good for Suffolk although much colder than it has been.

Posted by Sue in Suffolk at 06:00
Email ThisBlogThis!Share to TwitterShare to FacebookShare to Pinterest
Labels: Folklore, Michaelmas, Seasonal Display