I hadn't though about trying a different font until Deborah in Wales mentioned it, there are dozens, and I mean DOZENS available to choose from with new blogger .....this one is called COURGETTE .......seems apt! I think it's too hard to read  easily so it will be a one off. I scrolled down and down the fonts available without ever getting to the end but didn't find Comic Sans which is what I always use when typing on Word.
Maybe I'll try a different font everyday!
Beautiful sunny days here for most of the week and when the patio out the back of the house was in shade I scraped out the moss, soil and weeds from between lots of the slabs and pavers. Amazing what will grow when there doesn't even seem room for a seed to get started. It's not the look of the patio full of weeds that's the problem but rather a clump of weeds collects more dust and dirt around it - then rain water won't run away which  breaks the concrete joints and eventually loosens the slab. It was getting really messy and needed doing before we get too much rain to make bits slimey and slippery.
There was lots of this.......

"A fairly common garden weed that ought to be welcome for its ability to cover the ground in interesting reddish leaves and bright yellow trumpet flowers. Spreads rapidly, grows anywhere. Very difficult to get rid of, with tiny tubers and lots of seeds." 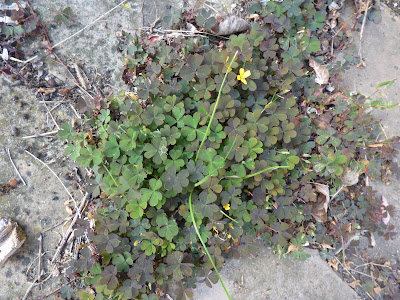 Also during the week when  the full water butt was in shade I washed all the flower pots that had been used this year - and I reckon some from last year too. Job done.

Just one swim during the week, but only two people booked in for the slow half so we were able to go up and down, rather than round and round. (Last Saturday I had half the pool to myself!) I keep hoping it's not going to get much busier and so far so good, although that's not much help for the finances of Everyone Active - the company who run the pool and the job security of the staff.

Tomorrow BiL Andrew is coming with tractor and topper/mower to cut down some of the very weedy bits of the meadow. Don't believe everything you read about the new buzz word............Re-Wilding! What actually happens when you leave a plot to "go back to nature" is that after a few years you get brambles.........not wonderful wild flowers and Silver Birch trees which is what is supposed to happen. It's true we had orchids here that have never been seen here before, but they too are soon crowded out by bigger, hardier stuff. It needs a bit of management.

Hope everyone has a lovely weekend. I hope to make the most of the sunny weather as the forecast for the end of next week isn't too good.
P.S Forgot to reply to comments yesterday. I turned off the laptop early and never went back. A Peahen is a female Peacock and no, there are no wildlife parks anywhere and yes they are noisy. Not seen her now for several days so maybe she's moved on.
Back Monday
Sue
Posted by Sue in Suffolk at 07:00
Email ThisBlogThis!Share to TwitterShare to FacebookShare to Pinterest
Labels: Being Grateful, The Garden, The Meadow