Going Back to Strange Times? Week 28

Thank you to everyone for comments about books yesterday. Sorry for not replying - I had the sort of day that hopefully won't be repeated very soon. More on this later..............

"There could be queues of up to 7,000 lorries waiting in Kent to cross the channel during the first few weeks of January, with a No Deal Brexit"

"People mustn't visit inside another persons home in Scotland"

"No one is allowed in a pub or restaurant  after 10pm"

"University students may not be allowed home for Christmas."

"Half the population of Wales is in a type of Lockdown"

Two late flowering gladioli on the table this week. The same colour as the first. There should be 2 different colours but only these gorgeous dark pink have appeared. 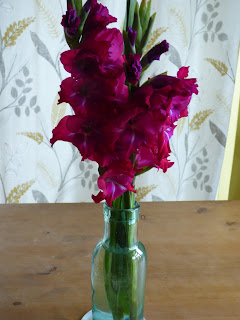 Both Youngest Daughter and Son decided they didn't want the bookshelves that were originally in Col's bedroom. So I got Brother-in-Law to help me get them downstairs to use them in the conservatory for the grandchildren's toys.
I do seem to have rather a lot of toys, at least there's no chance of them being bored when they come to visit! Everything on these shelves are my car-boot bargains, except for the little cart of bricks bottom left, they were new.....................handmade about 63 years ago! And the "vintage" Fisher Price Play People, they were new.....................about 38 years ago. 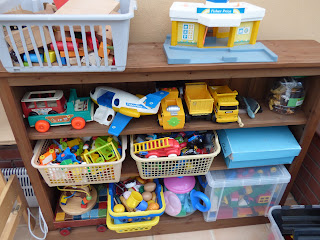 Hooray for Ian, the boiler repair man, who arrived much later than planned on Monday due  to problems at the previous job.  He apologised for being so late but I said it was just good that he could get here before the weather changes to cold later in the week. He repaired and serviced the boiler and said did I know the boiler is nearly 40 years old (blimey!) and it could give up anytime. He's reminded me of this every time it's serviced. He doesn't do new boiler installation  but gave me details of 2 companies that are reliable. That means the boiler and the sewer need doing sooner rather than later......Expensive...............The outside of the house could do with painting too.....sometime.

Swimming was good, just 3 people in the slow half of the pool so we had to go round and round but plenty of room to avoid each other. A new sign in the Sports Centre told everyone they have to download the new NHS app so they can register where they are and be informed of coming into contact with someone with a virus. My cheap phone does do apps but it clogs things up and apps soon stop working - which doesn't bother me because my phone is just for phoning and texting.. As the pool have all my details because of the on-line booking system  I don't intend to go out and buy a new phone.
And then yesterday, a day that involved driving across to the coast, getting the  nearly-4-year-old Oldest Granddaughter in and out of the car several times. Picking her up. Feeding us both lunch, getting her changed out of Nursery uniform,  and into Ballet clothes, driving to ballet and back and then out of Ballet clothes into home clothes and finally a late and slow drive home to Mid Suffolk and all this in pouring rain with the wind blowing a hooley. Floods and trees down all over the place and roads closed................ I didn't do much when I got home except collapse in a heap. This Nana business is Hard Work!
Got up this morning to find a huge branch from the Field Maple in the back boundary hedge is down, right where the raspberry cage was -...........phew...........thank goodness I took the cage down and got it sold.
Hope you all have a good weekend.  Apart from going swimming - mine will be quiet - Very Quiet!
Back Monday
Sue

Posted by Sue in Suffolk at 08:32
Email ThisBlogThis!Share to TwitterShare to FacebookShare to Pinterest
Labels: Flowers on the Table, Grandchildren, STRANGE TIMES, Weather