I wanted a chutney recipe to use and celebrate the  giant red peppers but without using tomatoes (which have nearly finished). Searched my recipe books and found this in my oldest, much splattered preserves book. 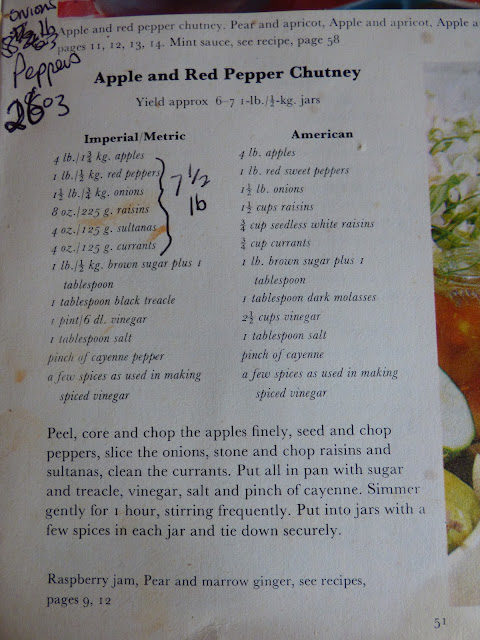 But I didn't want a brown chutney so didn't want to use brown vinegar or brown sugar or black treacle and I'm not overly keen on currants,raisins or sultanas in chutney.

I chopped some onions, cooking apples and 4 giant red peppers and added up the weights. Which came to more or less half the weight of the fruit in the original recipe. I added white sugar and red wine vinegar - using a bit more than half the recipe as it looked too dry - and a little salt . 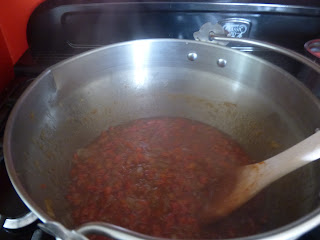 Cooked it all together until it thickened up and popped into hot sterilised jars. ( I didn't add spices to the jar as per the recipe) Screwed down tight while still hot. 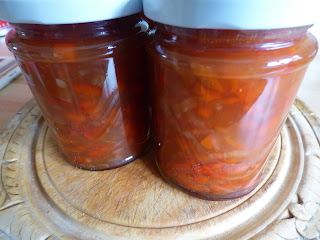 and a little left over to taste. Very sweet and sour. 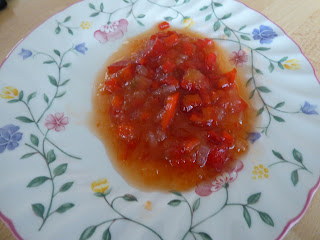 Because this is a sort-of made up idea for a chutney I have no idea how well it will keep - which is why I say don't try it yet. I'll let you know in a month or three.

There are still some big peppers ripening in the greenhouse and I've already put lots in the freezer, but among my recipes is one for mango and pepper chutney - another one for the Christmas hampers maybe.
(See the old metric measurement for vinegar............. 6dl? This book was written way before we went metric and dl's were never used when eventually metric became more common - not even sure what it means.........deci-litres I guess ...........600ml we would say now I think)

Posted by Sue in Suffolk at 07:00
Email ThisBlogThis!Share to TwitterShare to FacebookShare to Pinterest
Labels: Peppers, Recipes