Putting Autumn Back on the Mantelpiece

Summer wasn't very exciting on my living room mantelpiece, which doesn't really matter as most of my time is hopefully spent outside. 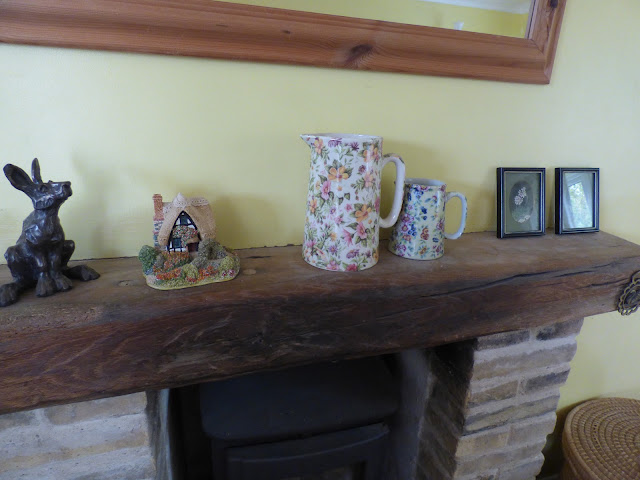 But when Autumn arrives it's all change. With today being the traditional first day of Autumn, the equinox or Mabon,  it was time to pull out the box  from under the stairs and cheer things up as we head to shorter days. 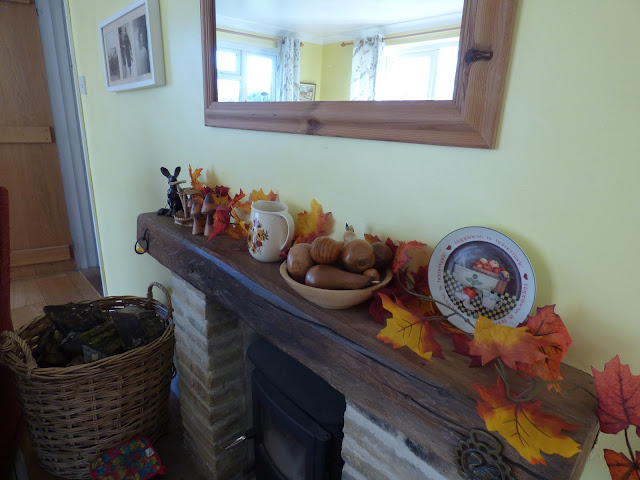 My Hare stays there all year (A hare-for-all-seasons!) and this is the fourth autumn for the leaf swag, jug and wooden fruit, the second year for the mushroom cluster and the first year for the 2 wooden mushrooms, sent to me from my penfriend. I've added a little "Happiness is Home made" plate this year for a change - it usually sits on the dresser - might need to stick it to the wall with a bit of blue-tac as I don't possess a plate stand thingy of any sort. The mantelpiece has cheered things up for a few weeks, and bats and pumpkin will be added for Halloween.

Speaking of Bats........... anyone know how a cat catches a bat? Have you ever seen it happen? I ask because on Sunday night Polly came through the cat flap in a rush, always a bad sign! Luckily the door into the conservatory was open and that's where she took her catch, which I assumed was a mouse. But when I went to investigate I found a bat flitting about desperately looking for a way out. I quickly opened the outside door and went back into the living room shutting the door behind me and it must have found it's way back out into the dark - probably in a state of shock.

This is the second time my small black cat has brought a bat indoors and I have no idea how she does it, how does a bat with its built in radar get caught by a wimp of a cat.
Back Tomorrow
Sue

And a PS - hello and welcome to some more new followers, just noticed numbers have reached 630. If you've just found me I hope you enjoy reading.

Posted by Sue in Suffolk at 07:00
Email ThisBlogThis!Share to TwitterShare to FacebookShare to Pinterest
Labels: Mabon, Seasonal Mantel-piece