Wanted.......... someone with a strong boot to dig out 4 dead-ish rose bushes. They were here when I came and despite regular dead-heading are now more dead than alive. Either they are bushes that  should have been cut right back or they've just come to the end of their natural life. I don't really know much about roses, not something I ever choose to grow in any of the 7 homes so have only inherited them in various gardens. But as it's a dedicated rose garden, edged with bricks and has obviously been there a long time it would be nice to add some new bushes after I've remove the old, dug over the rock hard bed and added some soil improver. Just have no idea how to get the darn things out - might have to wait for a big down pour and a strong man!

It's sad when some things change..............it's nothing serious, just my next door but one neighbours putting their beautiful home up for sale, they are such a lovely young couple, Suffolk people who've lived there since they built it mostly themselves 6 years ago on the site of an old cottage.
Who will afford it - it's very expensive but costs nothing to run as it has every energy saving feature you can think of.  I will miss them and their two daughters. It means I'll have lived up the lane longer than everyone else yet I've only been here 3½ years.

Here's another change......... making me feel old................my eldest grandson down in Surrey has started school as he'll be 5 next May. Eldest daughter sent me a lovely photo of him looking so grown up in his uniform,which I'll be able to print out and pop in my 4 space photo frame.

On Thursday it was the regular every-three-years Boob Squashing! Just a quick trip up to Eye and the mobile unit. Thank goodness for this service, I shall await the results and hope all is OK. Still don't understand people who refuse to go for this easy check up. Although there is one thing I was invited for this week............ my first flu-jab -  that I'm not sure about having it at all. I've heard some folk get a bad reaction and other people don't and as I spend very little time mixing with people other than family indoors and even less this winter plus we'll all be wearing masks when out, maybe it's better to avoid the jab.

These are the last of the aubergines, less than egg sized egg-plants!. Too late now for them to get much bigger so I brought them all in, even the ones no bigger than a large grape and turned them into a batch of aubergine, pepper, tomato and onion sauce for pasta. Nothing going to waste here. 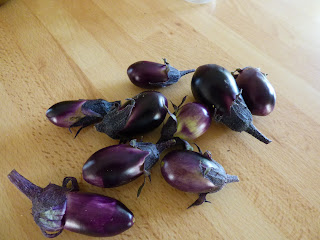 The last mention of clearing things out was at the end of February before everything came to a standstill. But now I can get started again. So....................

Lovely weather forecast for the next few days - a burst of summer to cheer us in September.

Hope everyone has a good weekend

Posted by Sue in Suffolk at 07:00
Email ThisBlogThis!Share to TwitterShare to FacebookShare to Pinterest
Labels: Aubergines, Being Grateful, Grandchildren, Swimming, The Garden