So Christmas is Cancelled and Crop Disappointments

Oh what good news (NOT) yesterday..................actually it was announced after 10pm on Tuesday night...............I heard it on Radio 4 as I was going to bed. I'm talking about  limiting numbers meeting socially to 6 and supposedly the news was revealed at that time to stop some scandal(?) involving someone in government (?) getting onto the mornings front pages. I have no idea of the truth of that but the cynical in me thinks it sounds about right.  No idea if this affects the swimming pool or the car boot sale and  scientists are cheerfully saying Christmas will be cancelled! Back to Puritan England then.

Thank you for all the comments yesterday with ideas for the pears. Unfortunately most seemed to include buying things such as alcohol that I don't keep in stock and as I'm on a budget ....things I don't buy for one-off recipes. I'm quite happy poaching a few at a time in a little water with lemon juice to keep them from going brown and a little sugar to bring out the pear flavour. I'm eating a bowl full every day so will get to the end of them in a week or three.

And the crop disappointments? well it  wasn't all wonderful in the garden this year.............is it ever?

I got all the onions up to dry out a few weeks ago - such a poor crop. I didn't get round to weighing them but  surely could have bought the same weight from the supermarket for less than the cost of the onion sets last March.
The tops on my onions were blown over early which stopped them getting any bigger and some were even going rotten on the bottom when I brought them in. More have gone rotten since, so that what's left won't last much more than a couple of months. 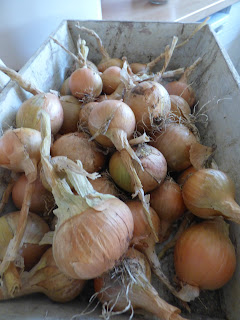 A kilo from Asda are 80p with 11 in the pack and many of mine are smaller than shop bought size.

A pack of  heat treated onion sets in the new Marshalls Seed Company catalogue that arrived last week are  £4.49 for 75. I buy heat treated so they don't run to seed and it's true these didn't bolt during the dry weather.

Then Butternut  Squash...................I started off with 5 plants from new seeds - a variety said to be extra large. I planted them into big pots on the patio and watered regularly. After a while it was obvious that 3 of the plants were dying off. They'd had flowers which hadn't opened but then just seemed to give up. Two plants hung on a bit longer looking nice and green with plenty of flowers  but again the flowers didn't open. Finally one flower produced just one squash, and yes it is bigger than normal.
I'll use it to make a big batch of vegetable curry later in the winter. 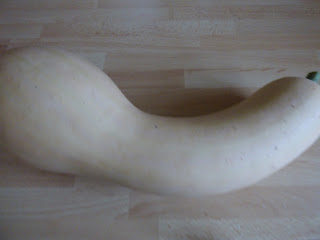 Back Tomorrow
Sue
Posted by Sue in Suffolk at 07:00
Email ThisBlogThis!Share to TwitterShare to FacebookShare to Pinterest
Labels: Onions