It's All About Tomatoes

It's almost  the end of the tomatoes in the greenhouse. I've had plenty to eat all the way since the very first one in June and  have now taken  off lots of leaves and dead bits to let the light in to the few remaining that are still green.

The seed catalogues for 2021 have started to arrive - 3 so far -  Kings, D.T Brown and Marshalls. I had a look in the seed tin to see what's left from this year. ........Very few Ildi Yellow plum, even less Big Mama and a new packet of Rio Grande which must have been in a collection on a magazine because they are not a variety I know. 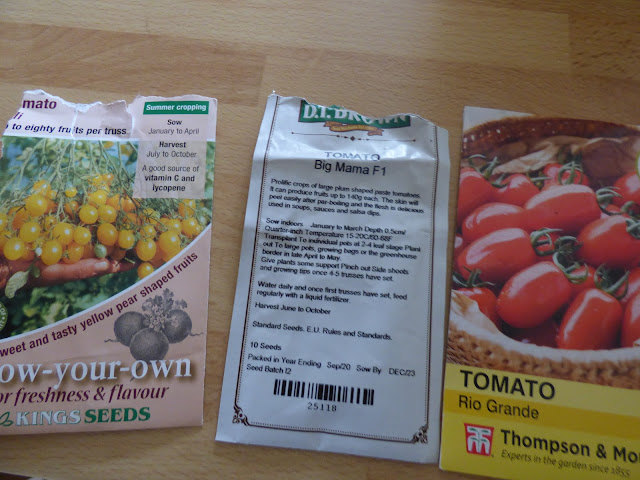 Once upon a time - not so long ago all tomatoes were red, round and 8 to a pound. My Aunt and Uncle on a Land Settlement Association smallholding through the 50's and 60's had long greenhouses full - all one sort - round, red and 8 to the pound. Anything too big or too small were fed to the pigs.

In Suffolk we have a HUGE greenhouse, the size of 11 football pitches built a few years ago and now producing vine tomatoes from March to October. Another similar has already being built in Norfolk.

Two giant greenhouses costing £120m are to be built next to sewage works to grow millions of tomatoes and bring 360 agricultural jobs.
Work on the greenhouses - the UK's largest - has already begun at Trowse, near Norwich, and Ingham, Suffolk.
Heat to create an ideal growing temperature will be pumped into the greenhouses from the sewage works.
New Anglia Local Enterprise Partnership (LEP) said they would provide an economic "shot in the arm".
Britain consumes 500,000 tonnes of tomatoes a year but only 20% are home-grown.

But back to my greenhouse - what 7 or 8 plants to grow next year?  Definitely Big Mama from the D.T Brown  Indoor only list,  they are delicious and have hardly any seeds or pulp and the skin comes off really easily when using them for chutney. I'll use the T & M Rio Grande packet and then maybe find something else completely different because looking for a new packet of Ildi - the yellow plum toms - in the Kings catalogue, I found, printed over the top of the Ildi photo CROP FAILURE!

So that's the reason none of mine germinated........... the seeds which I bought last year all failed and so did  those grown for seed for 2021. Well......... that answers that conundrum which I've been puzzling over all summer..........I must have re-sown with something different when the Ildi didn't appear and forgot to re-write the label! No point keeping the few seeds left from this year then!
I shall peruse my catalogues and choose. Hopefully once again I will be 100% home grown from June to October.
Back Tomorrow
Sue

Posted by Sue in Suffolk at 07:00
Email ThisBlogThis!Share to TwitterShare to FacebookShare to Pinterest
Labels: Tomatoes