What else is there to do on a wet chilly Sunday in June except to have a go at making Halloumi cheese from the cheese making kit?

The Ricotta is relatively easy but the Halloumi is a bit more complicated, so this is probably a one off try, just to say I've done it!
.
The recipe calls for 4 litres of full cream milk  making 600g of cheese. But as I'm not that keen on squeaky cheese I just bought a litre of unhomogenized full cream milk from the farm shop.
There are 19 steps in the instructions to making the cheese, starting with dissolving the rennet tablet in cooled boiled water and then heating the milk gently and adding the rennet.
Then it has to be left until it's beginning to set. Next the curd is cut into chunks to release the whey 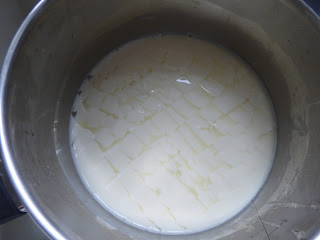 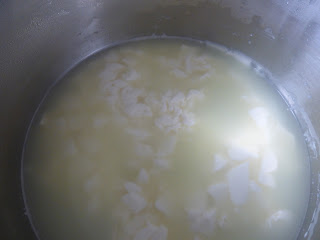 The curds are then put to drain in a muslin cloth over a bowl to catch the whey. A plate on top and then I added a couple of tins to make a weight. 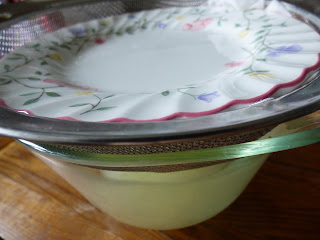 After an hour the next part is the unusual bit as the solid curd is then cut into slices and put back in the whey and reheated and kept at a low boil for 20 minutes. My slices were more like chunks because draining  the curds in muslin and a sieve had made the whole thing bowl shaped - no good for nice neat slices. 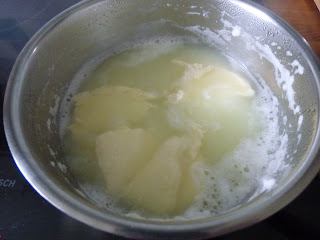 Next the pieces are lifted out, dipped into very cold water and then put to drain on a rack. Salt is sprinkled over both sides and it's left to cool 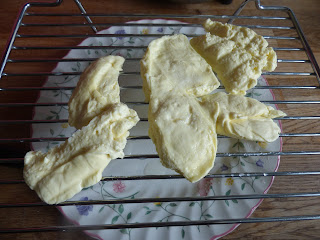 It will keep in the fridge for 5 days. I'm going to follow one of the suggestions in the booklet and dip the chunks in panko crumbs and shallow fry. Then probably have the rest in a curry.
I tried a little straight away and it has more flavour than shop-bought Halloumi but is just as squeaky.
Apart from Ricotta and Halloumi the other cheeses which I have the instructions for are Mozzarella, Mascarpone and Feta. Mozzarella is cheap to buy and not worth making as I only use it for topping pizzas or lasagne. Mascarpone requires a lot of double cream as well as milk to make and it's not a cheese I'd used very often. Feta might be worth a go although the recipe uses goats milk, unhomogenised cow's milk and yoghurt and takes two days to make............. so maybe not!
After cheese making it was good to settle down to watch the Tennis Final from Queens Club. Cam Norrie did well but just so many aces from Matteo Berrettini - how does he do that!
Yesterday was the 21st - the summer solstice - and I didn't even notice because here it was so wet, cold and gloomy and now it's all downhill to winter😕............
Back Tomorrow
Sue
Posted by Sue in Suffolk at 06:00
Email ThisBlogThis!Share to TwitterShare to FacebookShare to Pinterest
Labels: Cheese making, Summer of Sport 2021