For The Grandchildren Again

Thank you for comments yesterday, I survived the dentist. Didn't enjoy the squishy stuff for taking impressions! Yuck. So one appointment done 3 more to go and no more 75 minute ones - thankfully.

Interesting experience on the way there. You know when a road is closed for "accident investigation work", well I actually saw one of the things they do yesterday when I was held up for 5 minutes.  A police car pulled out of a side road in Ipswich in front of me and promptly stopped with blue lights flashing and blocked the road. The policeman hopped out of his car to tell me and a car behind that they were just holding traffic for a few minutes while they checked the road surface. A police Accident Investigation van - with blue lights flashing - then drove up and down a short stretch of road braking hard each time by the roundabout. After a while we were allowed to carry on to the roundabout where there were more police holding up traffic and doing something on the first exit. There must have been an accident at the roundabout sometime earlier I deduced. (luckily I wasn't late for the dentist).

Sunday was car-boot day again and it was very warm morning for a good walk round. I found some Barbie clothes for Eldest Granddaughter (£3) and yet another Barbie - ( who knew there was a doughnut maker Barbie?) in a box (£4) to put away for Christmas and a massive heap of books of the sort that go alongside school projects (all for £1 - bargain) 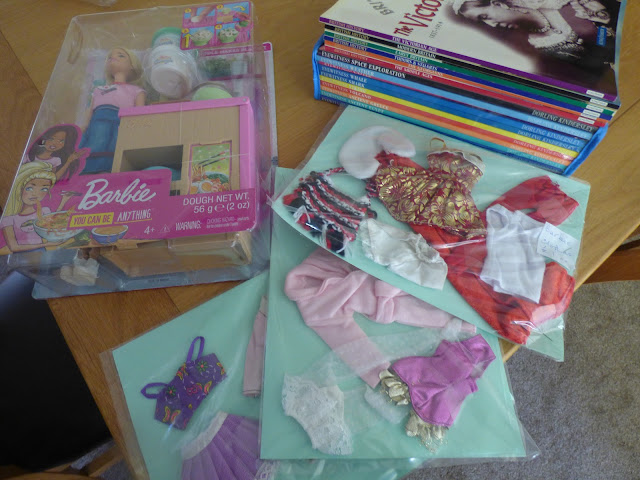 I also bought another Alchemilla Mollis (Lady's Mantle) for £1 which has gone out in the front garden border to replace one of the horrible 5 Hebes that are here (now  forever known, thanks to a comment, as the heebbie-geebies!) And then this 3 foot Christmas Tree in a pot for £5. This will also go out the front as soon as we get some rain..............hope no one nicks it at Christmas time! 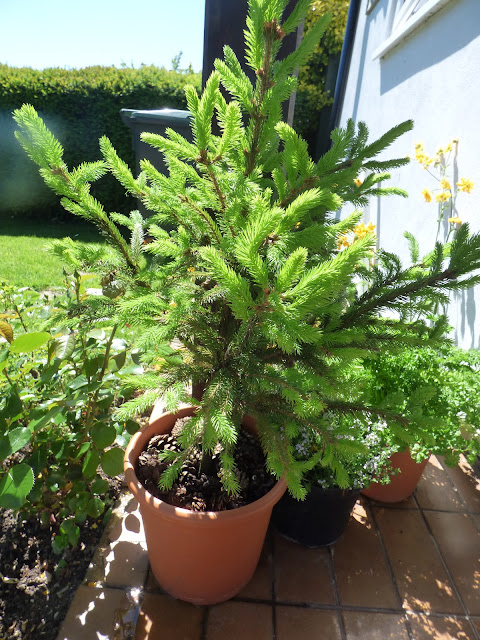 I just missed out on a brand new kettle for £5  - which was annoying as my red spotty kettle...... which was  bought new when we were living in Ipswich in 2016...... has started to get temperamental about switching itself off. Treated myself to a slice of banoffee cake from 'the Cake Lady' to take home and despite going around everywhere twice I was still home for breakfast. (which was toast - NOT the cake!)

The French Open tennis final on Sunday afternoon was a much better match than I thought it would be. I would have liked to have seen Tsitsipas (first Greek player in a final) win against the moaning Djokovic but in reality it was unlikely. But at 22 years old he has lots of years ahead. Then yesterday the first match on grass at Queens Club London for 2 years featured a Brit, Jack Draper - a Wild Card entrant - who did well to get his first win on the main ATP Tour beating Jannik Sinner - an Italian who had played in the French Open last week.

Back Tomorrow
Sue
Posted by Sue in Suffolk at 06:00
Email ThisBlogThis!Share to TwitterShare to FacebookShare to Pinterest
Labels: Car Boot Bargains, Grandchildren, Summer of Sport 2021