My first strawberry from my six plants ripened this week - just the one so far- so I thought I'd better go and see if the big strawberry patch at BiL's was producing because I knew he wouldn't think to let me know when they were ready. Good thing I did as just the one lot of rain on Wednesday night had already started to spoil them. Brought home a colander full but some were already too squishy for jam. 1½ pounds popped into the freezer for later. I'm just going to make a few jars for the Christmas Hampers.

Friday was exciting as the information about my State Pension arrived.  I'm only entitled to the basic State Pension as most of my life was spent at home with children but it's still nice to know I have some money coming in each month as well as the spouses pension from the County Council. I'm frequently thankful that Colin loved his job as a bridge inspector and stayed long enough for the pension.

Flowers on the table this week are some of my own roses, thanks to the previous owners there are plenty to pick. They don't last long indoors and even less time outdoors when it rains. The Peonies and Geums also got flattened with Wednesday night's and Friday's rain although it was much needed everywhere else. 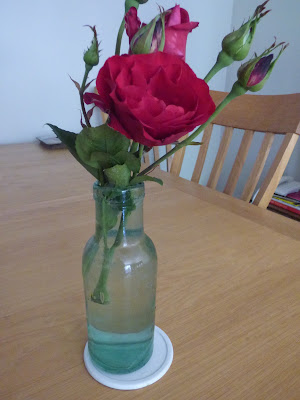 Weather forecast for Sunday isn't looking hopeful for a car-boot sale so not many plans for the weekend. On Saturday I just have to go and show my ID to book the hire of a turf removal machine thingy so I can make my raised vegetable beds. Decided that would be much easier than any other method when I tried to dig some slots for the wooden bed sides to sit in - Much Too Hard. According to the Gardeners World website if I stack the turf upside down and cover it, it will rot down and provide some good soil to add to the flower and veg beds in a year or so.

Hope there are some dry spells for the tennis to get finished at  Queens, then its a countdown to Wimbledon starting on the 28th.

This week I've been grateful for
Have a good weekend wherever you are. I shall be back Monday.
Sue
Posted by Sue in Suffolk at 06:00
Email ThisBlogThis!Share to TwitterShare to FacebookShare to Pinterest
Labels: Being Grateful, Flowers on the Table, Strawberries