All Sorts From My Week

Last years compost has now been spread over the front border, hopefully some worms will mix it in with the rock hard clay soil once we get rain. And I turned over this years compost into the other bin. Got the grass cut last weekend to tidy up the tatty bits that had grown and it's gradually turning green again. Next job will be to remove the bean tripods, harvest the squash and clear the plants. My Kale and Brussels Sprout plants were completely decimated by everything - flea beetle, white fly, caterpillars and that's despite being covered. They've all gone in the garden waste bin - an expensive and annoying fail. All that will be left in the garden for winter are a couple of dozen small leeks.

This weeks WI speaker showed us Origami - not the Japanese sort where you fold one sheet of paper into animals and birds but Chinese Origami where 3D models are built up from triangles that have been folded from oblong bits of paper. The history of it is HERE. We made flowers, which are supposed to be the most basic thing to do - a very fiddly craft - I nearly gave up before I started! 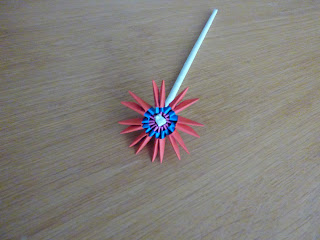 The speaker and his two daughters had everything prepared for us so we didn't have to fold the 24 triangles or roll up the paper to make a stalk, before we started. He brought lots of very clever models he had made to sell.... penguins, swans, owls etc. Priced from £5 up. I didn't buy one - looked too much like another dust collector!
The picture below is from the internet but he had some just like this. The only glue used is to stick on the eyes. 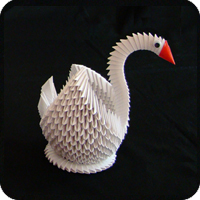 Reading this week has been "Where the Crawdads Sing". It's a good story, a mix of mystery, coming of age, romance and a way of life forgotten.  I enjoyed it except when it made me cry but  I couldn't see what the fuss was all about. When the film gets round to being on TV I'll try and watch it.

When you try and join a main road and there is a long line of stationary traffic and the lorry drivers have all got out of their trucks to chat, you know it's time to take a detour - I was heading to swimming and luckily know the back roads to get there. Found out later the air ambulance had been called after a serious crash between three vehicles. Drivers taken to hospital - but no serious injuries. The road was blocked for several hours so I'm glad I found a different way home too, crossing over to my side of the A140 in a different place. How a 3 vehicle accident happens in a 30mph limit is a puzzle.

Yippee do, series 20 of ' Strictly' has started - who knew I would ever say that! But it certainly cheers up an evening when you are on your own and you imagine everyone else is out having fun, partying or at the pub! The launch show was last night after it was delayed a week and the first live show tonight.....another sign of Autumn with Winter on the way.

Back Soon
Sue
Posted by Sue in Suffolk at 00:01
Email ThisBlogThis!Share to TwitterShare to FacebookShare to Pinterest
Labels: Swimming, TV, WI