Haven't grown proper sized sweetcorn for several years but after Brother-in-Law gave me a couple of fresh cobs last year I knew I wanted to grow some this year.
It went well, despite the drought.
My post from 5th May

On Monday morning I noticed some of the sweetcorn kernels had germinated and took the tray out of the plastic bag it had been in since sowing them in the peat pots last week. They  grew an inch before taking this photo Monday evening and  they've grown another inch since.  They're on the living room window sill, better move them out to the greenhouse later today....... 33 out of 36 germinated. Looking hopeful for delicious sweetcorn cobs later in the year. 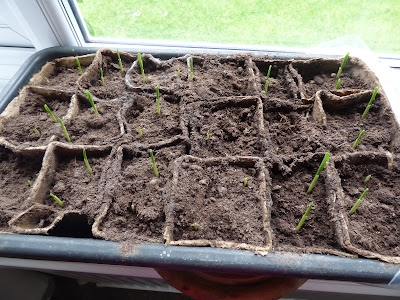 This is how they were looking on the 5th July 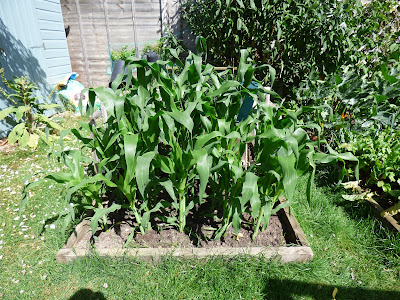 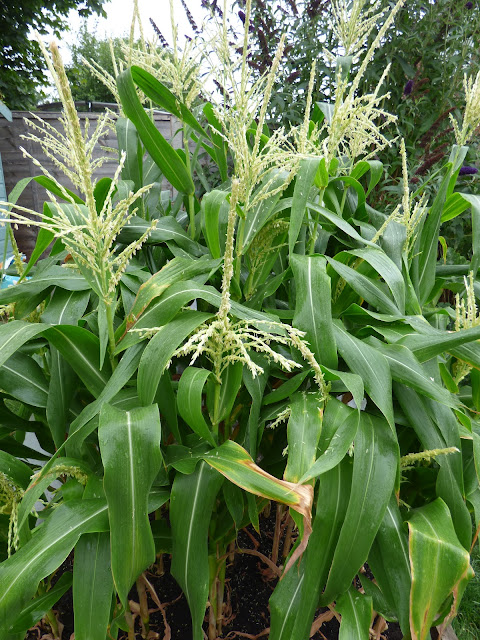 While the female cobs were hiding and just starting to appear and swell. 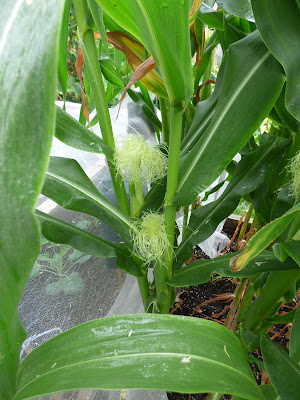 I ate my first delicious corn-cob on the 19th August..........just So Good! Then ate them as they were ready right up to the middle of September. I even gave a few away when there were several ready all at once.
Almost the last of them. 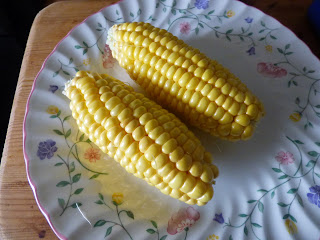 They were all a good size, one or two had been attacked by critters that had made a few kernels go brown and a few didn't  come to anything but still lots to eat.
I've cleared the bed and all the leaves have gone in my compost bin,  and stalks and roots, once I'd shaken off all the dirt, have gone in the council garden waste bin. Sweetcorn are always quite tough to dig out - they have big roots.
Looked in my new book "A Potted History of Vegetables.........
I expect everyone in the US knows that it's a native of the Americas and has been grown for centuries there although over here it was mainly something that was bought in a can until fairly recently! There were adverts for "The Jolly Green Giant" cans of Sweetcorn on TV when I was young. Did my Mum buy tins of sweetcorn? I can't remember but doubt it. We never ate corn cobs until growing them ourselves in the 90's on the smallholding. The children loved nibbling their way round a whole cob. I used to make pop-corn for them too sometimes and we had a pop-corn maker for a while until I think son took it off to uni.
Apparently, to begin with, the yellow varieties were used only as cattle feed and white were preferred for the table.
It's still grown for animal feed and also used around here as a cover/food crop for farms that rear pheasants for shoots.
Brother-in-Law Andrew was round yesterday kindly putting a new tube in the bike tyre for me and he said he's still got some cobs on his plants that have come late and all at once and if I go round at the weekend I can help myself to a couple - lovely.
Back Soon
Sue
Posted by Sue in Suffolk at 00:01
Email ThisBlogThis!Share to TwitterShare to FacebookShare to Pinterest
Labels: Sweetcorn