It was an age since I visited one of the churches in the 100 Treasures in 100 Suffolk Churches Book.

So after visiting the Rural Bygones sale at Campsea Ash I carried on to the coast at Orford,a popular Suffolk tourist village that really is at the end of a road.

Orford is  almost on the coast beside the River Ore (which starts out as the River Alde further north) as it twists and turns between ever shifting shingle banks  to the sea at Shingle Streeet. It's well known for it's castle built in the 1160's, Pinneys smokehouse, RSPB Havergate Island and the old Radar Station on Orford Ness - now a nature reserve owned by the National Trust.

This is the view across the river to the Ness and the old buildings used during and after WWII. 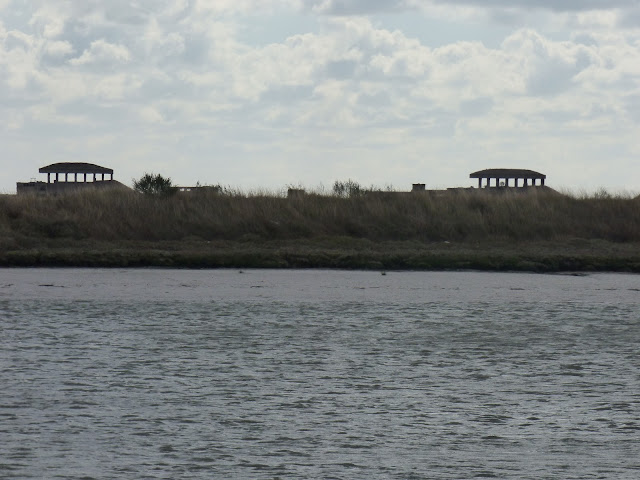 Both Orford Ness Nature Reserve and Havergate Island are only reached by ferries which don't run all the time but have to be booked.
The river is a favourite place for yachting and fishing 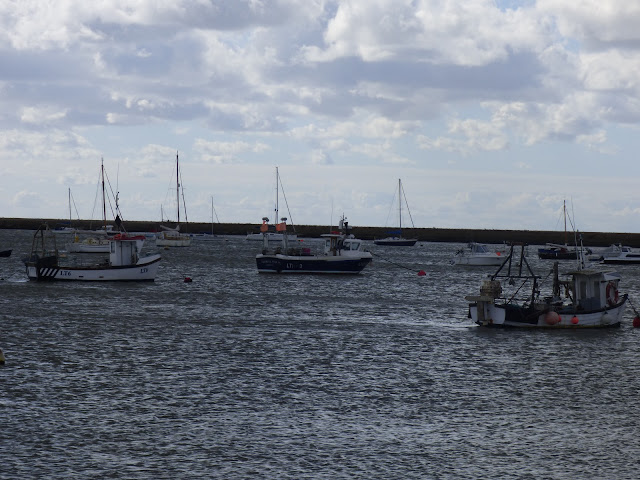 There are lots of  fishermen's huts along the quay 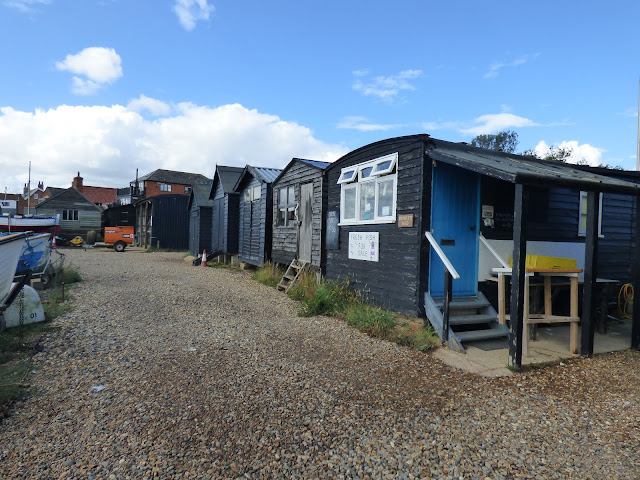 A map of the village 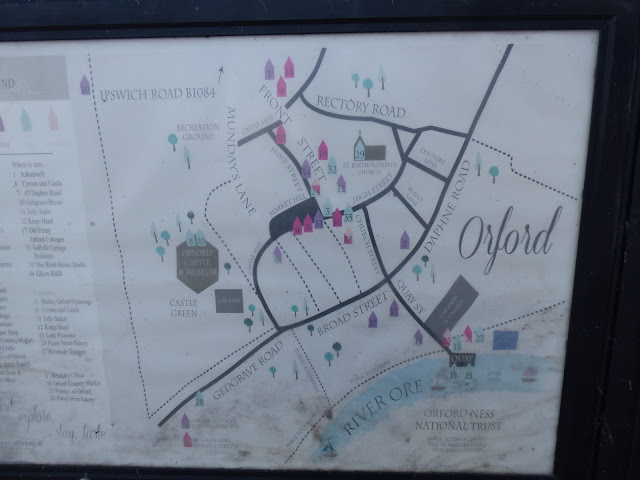 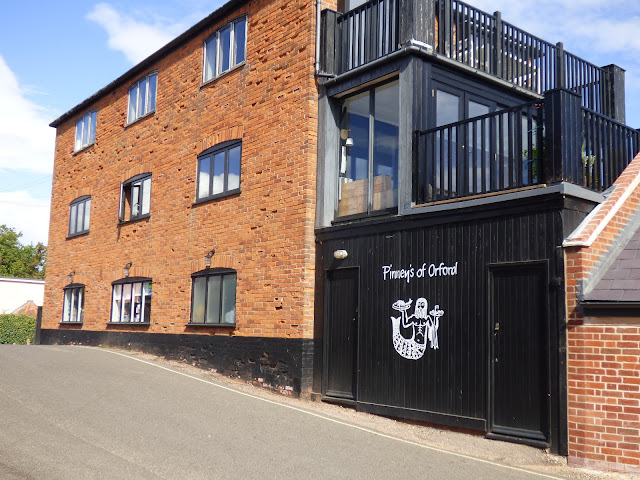 The church sits on a small rise ¼ mile from the river. The tower was rebuilt very recently in the 1960/70s after it fell in 1830 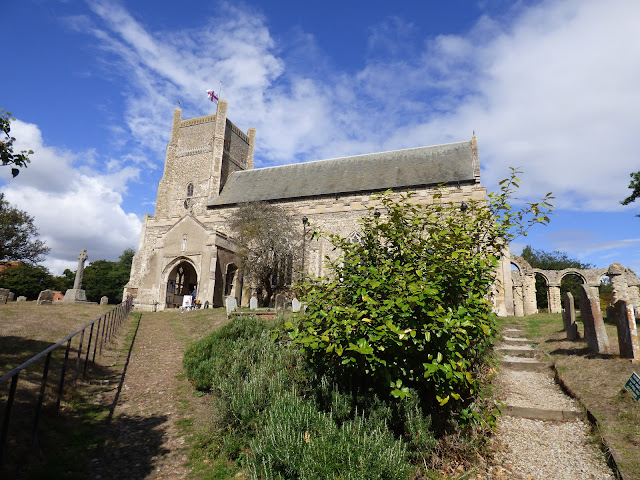 The reason for the church getting a mention in the 100 Suffolk Churches book is because of the ruins of the Norman chancel built quite early in the Norman era and then rebuilt during the C12 at the same time as the castle . The  nave of the church was rebuilt again in C14 and the chancel was still attached then but the village declined and the older part fell into disrepair and was abandoned and walled off sometime in the 1700s. 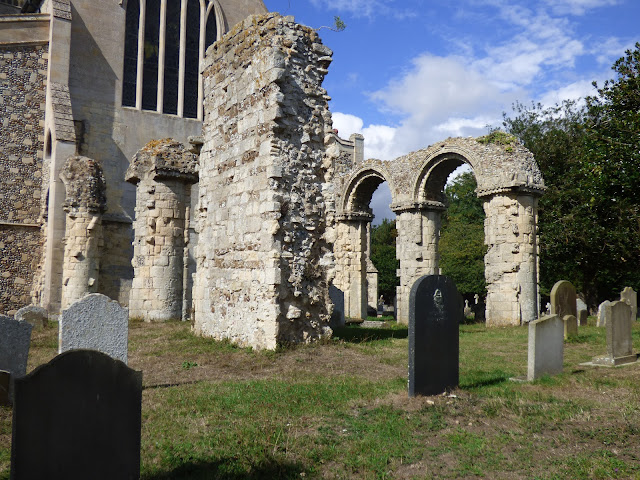 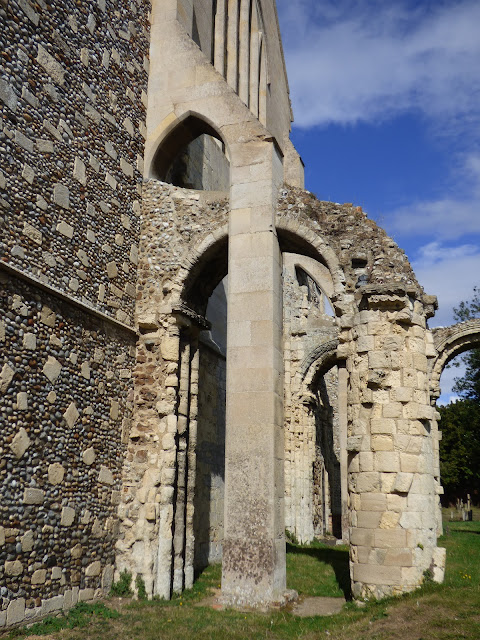 As usual the font is the first thing to see as you step into the church, this has several carved panels some not seen anywhere else 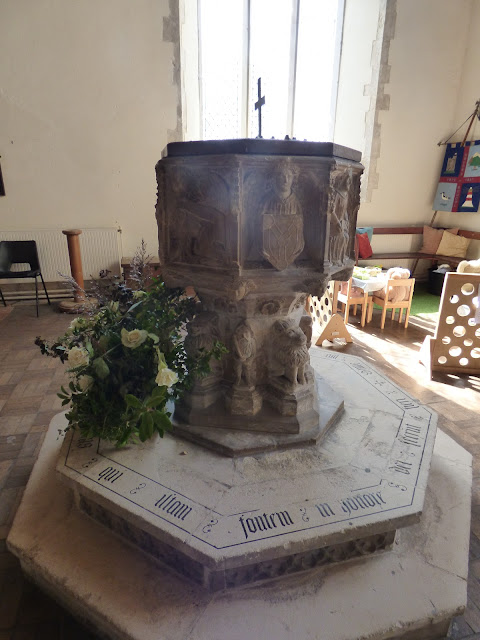 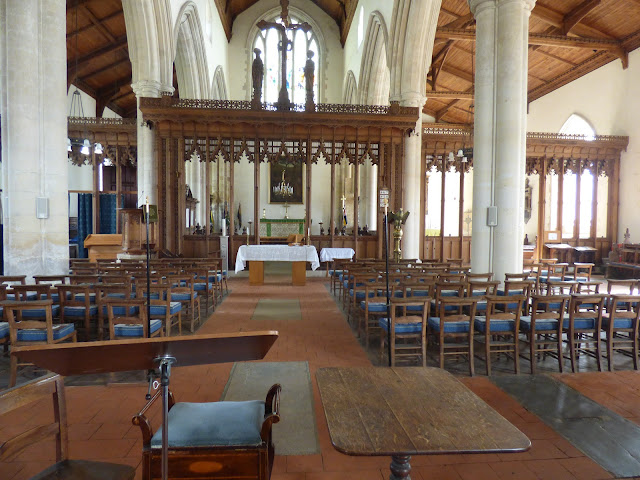 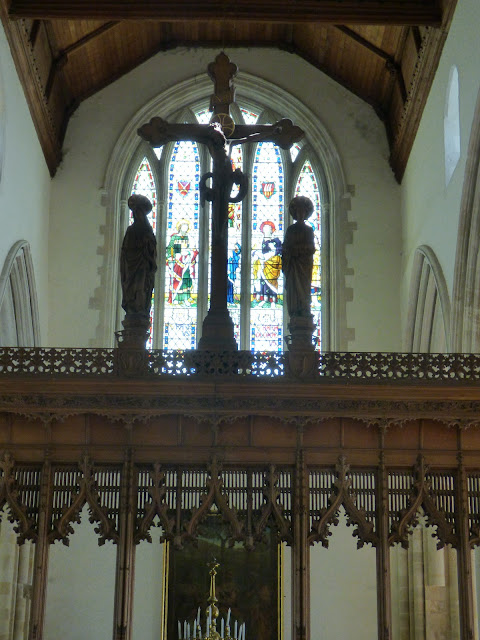 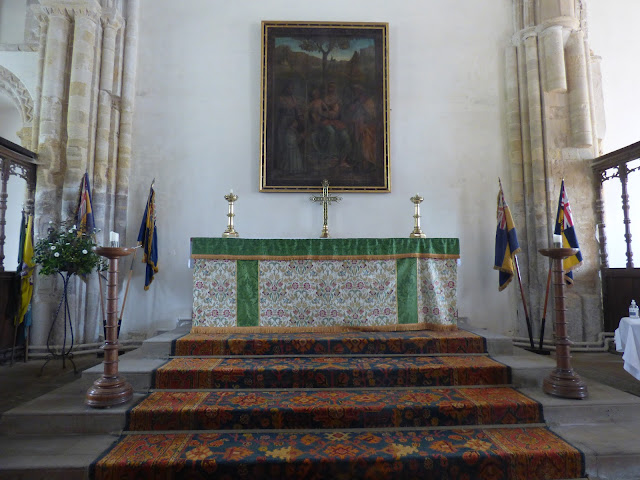 In the Lady Chapel is a lamp in the shape of the Crown of thorns. A recent bronze sculpture by Orford artist Tim Fargher 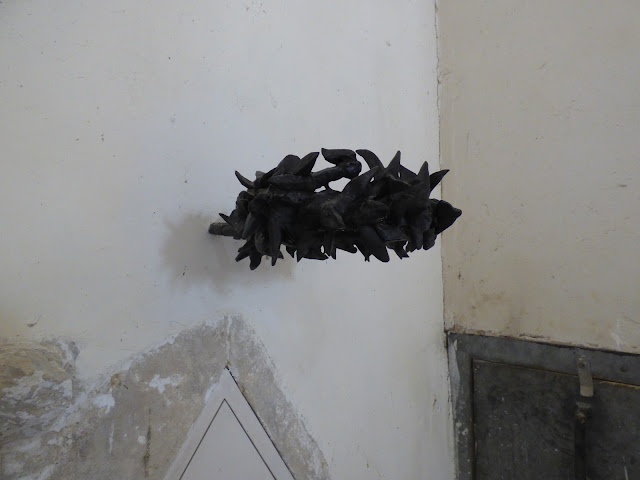 Dedication to the donor of the organ 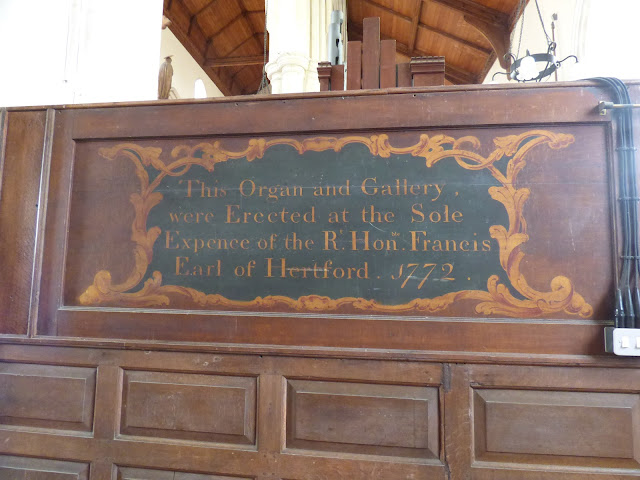 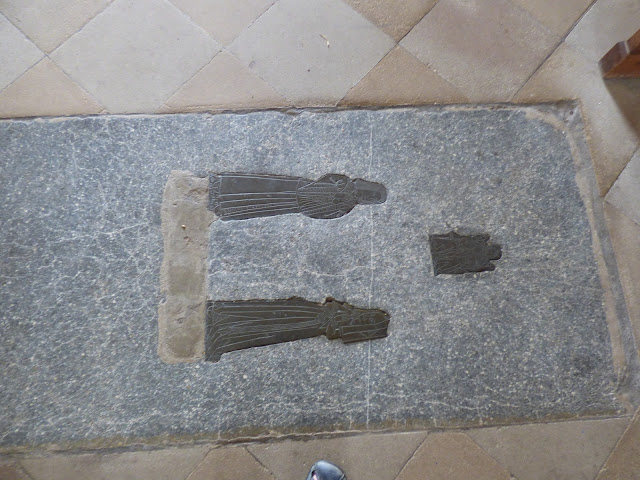 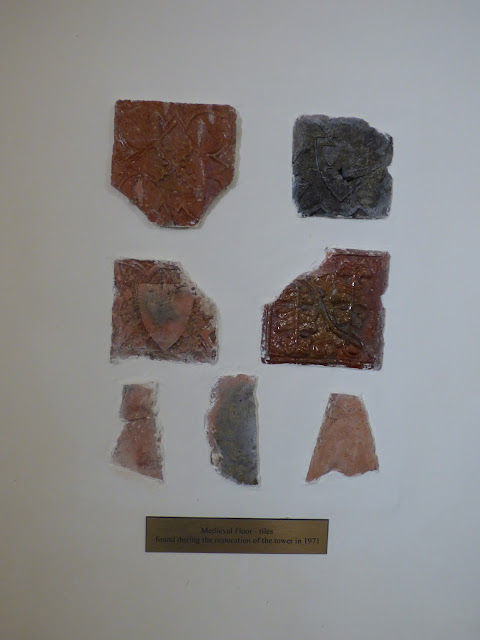 Looks as if whoever this Saint is he is holding the old church . This is over the porch and I should have asked more about it. 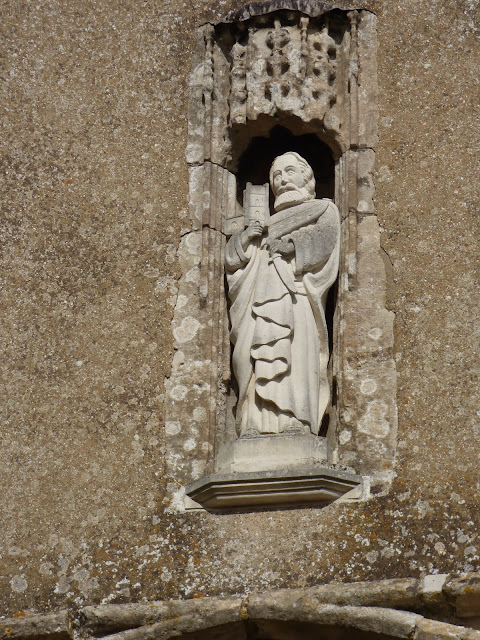 The castle built by Henry 2nd in the 1160's is a few 100 yards from the church and is completely wrapped in scaffolding and plastic at the moment.  I would have gone to have a closer look but just as I took this photo it started raining out of a mainly blue sky so as I'd got no jacket and no umbrella and didn't fancy a soggy 45 minute journey home I hurried back to the carpark. 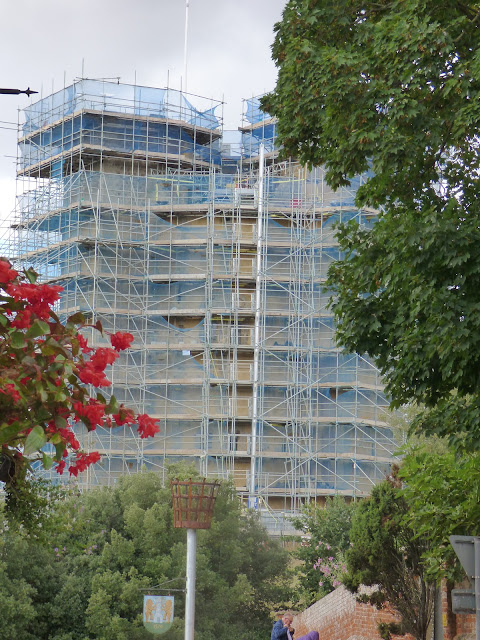 Back Soon
Sue
Posted by Sue in Suffolk at 06:00
Email ThisBlogThis!Share to TwitterShare to FacebookShare to Pinterest
Labels: Suffolk Churches