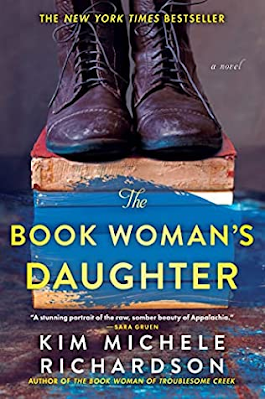 In the rugged Kentucky mountains and forests of the 1950's, Honey has always known that being different is a problem. Honey is the daughter of the famous blue-skinned Troublesome Creek packhorse librarian. The genetic problem inherited from her mother means that Honey's hands and feet are blue, especially when she is stressed and Honey has learned to cover them and hide from the authorities. When her mother and father are imprisoned, Honey aged 16, has to fight to stay free. Luckily she gets a job carrying on the Packhorse Librarians routes around the remote farmsteads and homes.

The story is one of women having to be strong whether they are the first women coal miners, the first women firewatchers or part of the  Frontier Nursing team. There are many men who don't agree with these women having "their" jobs and they are not afraid to try anything to be rid of them - including burning them out.

The book is a fascinating and at the end there are photos of the real women who did the jobs mentioned. I loved reading that when the original Packhorse Librarians of the 1930's had a shortage of books to deliver they would take cuttings from newspapers and stick them with pictures into scrapbooks so their customers always had something to read.

I didn't know the book was the second in a series - the first book being about Honey's mother - but it stands alone. I was interested to read that the book is set reading in some Kentucky schools - a good way to learn history through fiction based on fact.

Back Soon
Sue
Posted by Sue in Suffolk at 09:02
Email ThisBlogThis!Share to TwitterShare to FacebookShare to Pinterest
Labels: Book Reviews