No matter how hard up we were in our early years of marriage we always managed a holiday. Never abroad and always very basic. We camped in this country, cooking on a picnic stove and spending cheap days on the beach when the weather was good or visiting a castle if it rained.

Our honeymoon began it all in  September 1979 on the Isle of Wight, in a tent and cooking things borrowed from the Scout Group. I was slimmer back then! 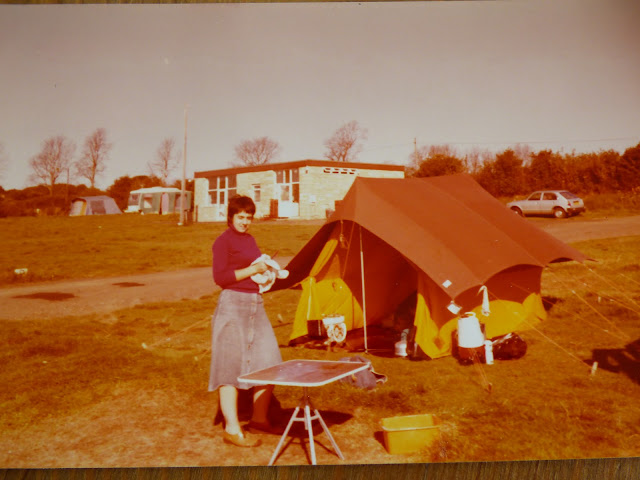 We camped all through the mid 80's with two children until a really wet and cold week in Sutton on Sea, when we decided to save for a cheap caravan. Our first was old and tiny, 12 feet long I think, when the bed was set up there was no room for 4 people to stand up all together! I've got no photos - couldn't afford to get them printed back then.

Youngest Daughter was born in November 1987 and in 1988 we went back to camping and sold the caravan. It had been a squash for 4 so no way could we fit a baby in as well. We had a tent with two end sections and a centre area for cooking and eating. So the two eldest were one end and me Col and baby at the other end.

A bit later as the children grew we had 3 small tents with me and Colin in one tent with the cooking and food storage and a smaller tents for the girls in one and son in the other. Plus the toilet tent. On this site we had to squash all the tents together as the warden moaned about us having 3 tents for 5 people 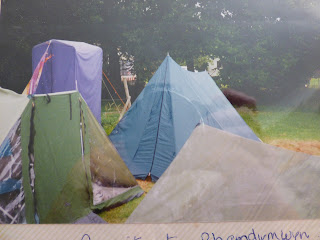 Sometime before moving to the smallholding in 1992 we bought a bigger second-hand caravan , we lived in it for the first two weeks at Fareacre while the house was totally re-wired, although we used the 3 tents  at Grizedale Forest in  1993 (below) because no caravans were allowed.

We were lucky as my Aunt and Uncle who had had a smallholding all their lives before retirement would come and stay on the campsite and look after everything for us. My Mum and Dad would often bring their caravan over too until Mum became too poorly to travel. 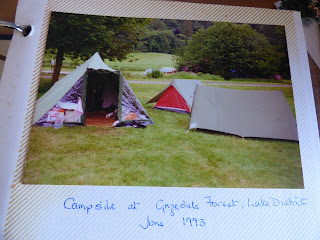 We had a Toyota Hi-ace which pulled the caravan well, Colin fitted it out with two bus seats and lap belts behind the two front seats so there was plenty of room for all 5 of us and our gear.

Here we are on a temporary holiday site at Lancing in Sussex. We had an awning and the two eldest children often slept out in it rather than squashing us all in the caravan 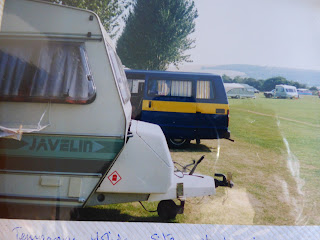 Not long after moving to the smallholding we did something Colin had long wanted to do - a narrowboat holiday. We went at the cheapest time, out of main season right at the end of the school summer holidays and  boated down the South Oxford canal. It was an extra slow trip as there were water shortages and queues at the locks. 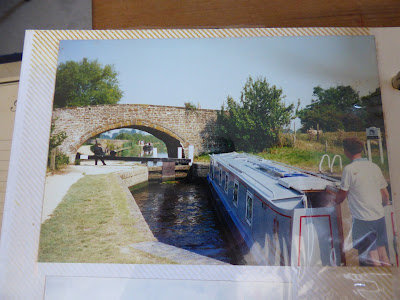 This photo below is 1995, possibly the last holiday with all 5 of us. After that Eldest Daughter stayed at home. 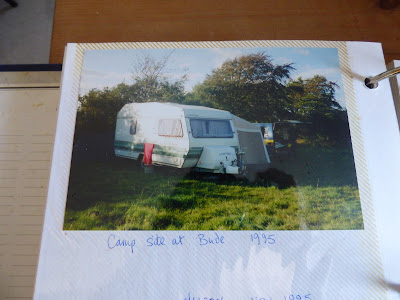 A couple of years later both the eldest didn't want to holiday with parents and we had our second narrowboat trip with just Youngest daughter. We went all round the Birmingham Ring of canals, stopping at the Black Country Museum and working our way through dozens of locks and a few tunnels. 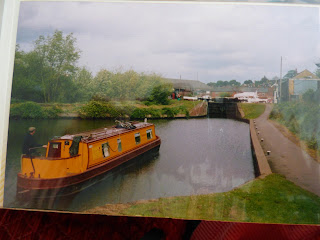 By the time Youngest daughter was 16 she didn't want to holiday with us either and Col fitted out the Toyota with a frame to take the mattresses from the caravan so that when holidaying with just the two of us plus Lucy the dog we  didn't have the faff of towing a caravan.

I haven't got a photo of how it looked inside but we fitted in the porta-potti loo between the seats and bed and had the picnic stove at the back under the shelter of the back door of the van which lifted up. It was OK unless the weather was bad.

2002 somewhere in the Welsh borders 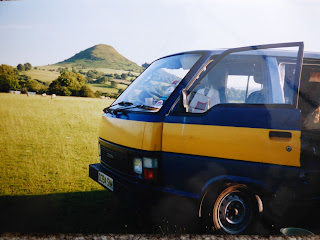 Thank you to everyone for comments about the  Book Woman book yesterday, apologies for not replying but I had a chance to rough out some future blog posts in drafts - so got busy with that job.

Posted by Sue in Suffolk at 06:00
Email ThisBlogThis!Share to TwitterShare to FacebookShare to Pinterest
Labels: Holidays, Memories