Today is St Matthew's Day and traditions says it was the day when bee-hives were closed for the winter
St Matthew shuts up the bees
This small book all about honey is one I picked up for next to nothing from a car-boot sale in the summer, it turned out to be a fascinating little book, packed full of everything you ever wanted to know about honey.
There's a whole A-Z of the flavours of honey when it's been made from various plants and several pages of quotes about honey. 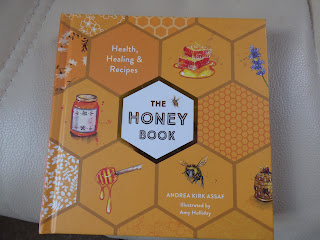 If you want to gather honey, don't kick over the beehive
Dale Carnegie
Tart words make no friends: a spoonful of honey
will catch more flies than a gallon of vinegar.
Benjamin Franklin
Did you know humans have been harvesting honey for at least 8,000 years, for most of those it's been taken from wild bees then came straw skeps, from which the whole combs would have been taken. Then wooden hives with purpose made removable frames that we see today and centrifugal honey extractors and honey production and harvesting became a lot safer and easier.
I bought this little skep shaped honey pot  from a boot sale a few years ago, simply because I liked it. It's never been used for honey and sits on my bookshelves collecting dust! 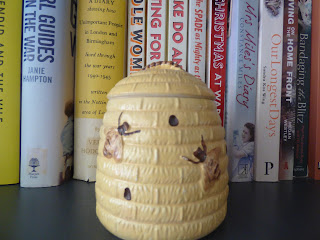 The page below is from my book 'An English Country Year' 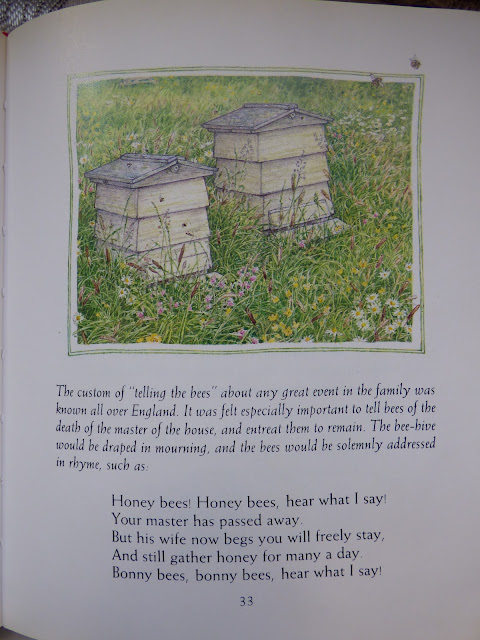 We never kept bees at the smallholding because of having people on the campsite and animals and because it's quite a complicated business which neither of us wanted to learn. Our neighbour over the road had beehives and we often swapped eggs for a jar of honey. Nowadays I always have a jar in the house bought locally from one of several local producers. I like it best on toast as a change from marmalade or in hot water with lemon and cinnamon for a cold cure. It's supposed to be good for burns and I've used it on burns from the oven shelves when I've not had an Aloe Vera plant but it's a sticky cure and I'm not sure it helps.
Back Soon
Sue
Posted by Sue in Suffolk at 00:01
Email ThisBlogThis!Share to TwitterShare to FacebookShare to Pinterest
Labels: Folklore, Natural world, Saint's Days