In 2004, while bridge inspecting in South Suffolk, Colin happened to go past a village garage and saw this small campervan out for sale, we went to have a look and decided to buy it. It had been partially professionally converted but then kitted out to use by the garage owners son to take a motorbike to trials around the country and was a bit basic. There was a built in loo plus a fridge running from a separate battery and a LPG hob as you would find in most campervans, a bed that fitted together from cushions  but no electric hook up point  and no lighting except what you would find in any van but at least we could stay dry in bad weather .

We had some good holidays and this is the van, which Colin named "Selina", at Dunster beach in Somerset. (I've never named a car in my life!) 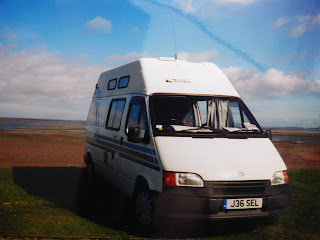 It got harder to get away as the smallholding and campsite got busier and Aunt, Uncle and My Dad (mum died in 1999) got too old to stay and the Eldest two children were away at Uni. or had moved away. We always went out of season and with no heating in the van it was sometimes freezing!

Around 2007 we wanted to go round Scotland after our campsite closed in late September and sold this small van to buy a small proper motor home which had electric hook up and heating and even a shower and kept it for a few years. We had a fantastic holiday all around the Scottish coast but no photos, I didn't have a camera for several years.

Now comes a strange time between 2007 and 2013 when we used the small motor-home, part exchanged it for a bigger caravan for a reason I can't remember and hated the size of it and sold it and all this time I took no photos at all. I don't know where we went although I do know we had a few days on the Ashby canal in a small narrowboat. No locks and a there-and-back trip which was not very interesting .

Then some years when the campsite and smallholding were just too busy and we had no holidays at all .

I found this on the old blog

We had a holiday

We have just got back from a holiday, the first for nearly 3 years. We spent a week in a cottage overlooking the West Somerset Preserved Railway line, the harbour and town of Watchet in Somerset and very nice it was too.

After that good holiday we decided to slow down the smallholding to have more holidays and we bought a cheap caravan off ebay, traveling up through the Fens to collect it. I think we had just one short break in it before Colin's blood cancer problems started.

In July 2016, when his tablets were working well we had a few days at Builth Wells in Wales - not with the caravan - just in case he became poorly again so we rented a holiday cottage.

That was our very last holiday together.

In May 2019 I went with Son, DiL and youngest granddaughter for a few days in a town house in Lincoln.

And that was my last holiday anywhere.

Thanks for comments yesterday -  interesting thoughts from everyone.

And on a much lighter note - did anyone follow the series "Capture" on TV, with the final episode last night? What a clever story.
A good lesson for everyone...............definitely don't believe everything you see or read!
(Although I guarantee this blog isn't Deep Faked!)
(Or is it!!)
Back Soon
Sue
Posted by Sue in Suffolk at 06:00
Email ThisBlogThis!Share to TwitterShare to FacebookShare to Pinterest
Labels: Holidays, Memories