One of my favourite books to look in for folklore information is Cattern Cakes and Lace.
It's an old book now, published in 1987 but I like it  because of the pictures and the old traditional recipes 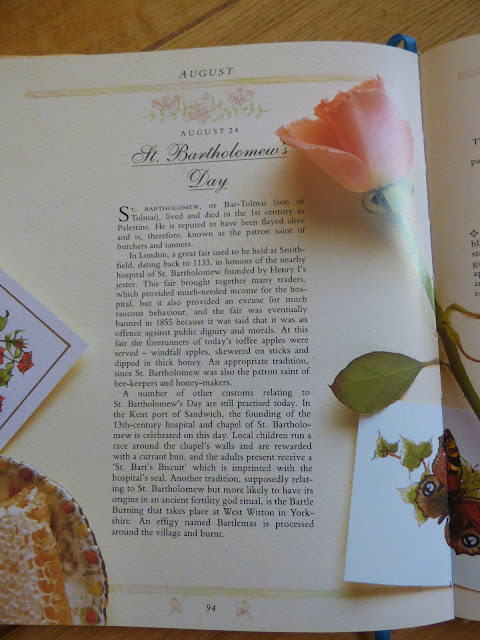 One of the recipes under August is Saffron Cakes now traditionally made in Cornwall. And that's when I realised that somewhere between the smallholding and the cottage, my little box of Saffron had vanished. It was brought back from India (or maybe Egypt or perhaps Spain) for me by a neighbour many years ago but I'd kept it and used a few strands now and again. I wonder where it was lost? I'd always thought it was quite exotic but seems you can get some for £2.50 in Tesco!

According to this book, as well as being the patron saint of Beekeepers. St Bartholomew is patron saint of butchers and tanners because he was reputedly flayed alive. Those Saints certainly had a rough time of things back in the day!

One of the weather rhymes I mentioned at the beginning of the month said  "Dry August and warm doth harvest no harm". It wasn't very dry or warm at first but last week the weather was good enough for the wheat field beside us to be combined and baled. Col noticed that in the corner right by our garden was a large pile of straw the baler had missed so he collected it up in the wheelbarrow and it's now in a bag in the shed ready for putting round the strawberries next summer. Useful.

Thank you all for comments yesterday, we don't see the Long-Tailed Tits every day on the feeders but they are around in the hedges quite a lot. What we do have here  that we rarely saw in Knodishall are Sparrows - by the dozen. House sparrows mainly and Tree sparrows too. The House sparrows live in next door's roof and congregate noisily in our hedges.

Three more jobs from the to-do list have been organised...........  both the new oil tank installation and pumping out of septic tank will be done in the next week. Then we've had someone round to look at the huge Ash trees at the end of the garden. There are several big branches over our veg. patch and fruit trees which need taking down plus the willows behind the workshop need cutting back so they don't sit on the workshop roof. That's going to be a big job that will be done sometime during the Autumn. We are using a local company but they are behind on work due to having a lot of their machinery stolen recently. It will be expensive but will give us enough wood  for the wood-burner for a couple of years, let more light into the garden and make everywhere safer.