I started to paint the August picture in the Country Diary of an Edwardian Lady colouring book but didn't have the right shades - there's only one purple in my set of 24 water colour crayons - to do the thistle, and no green crayons the right shade for the leaves. 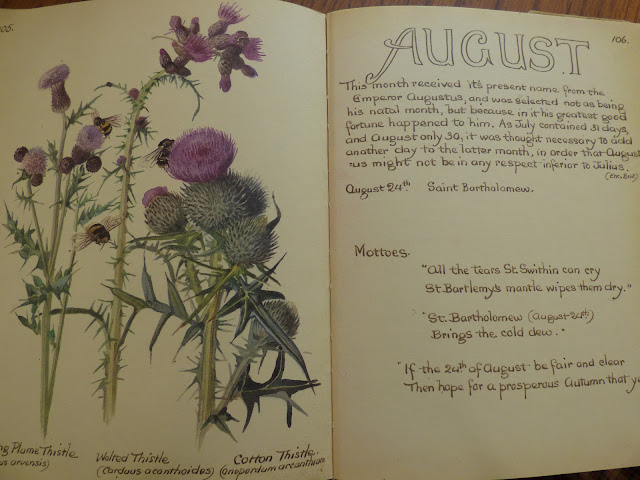 My photo of a thistle instead of my colouring 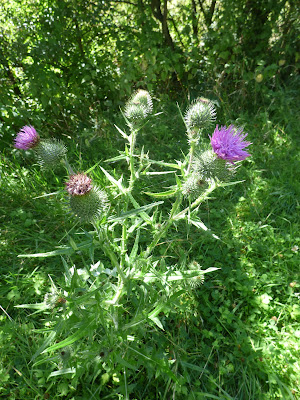 This is what August looks like here in among the arable fields of Suffolk, a field of wheat stretching 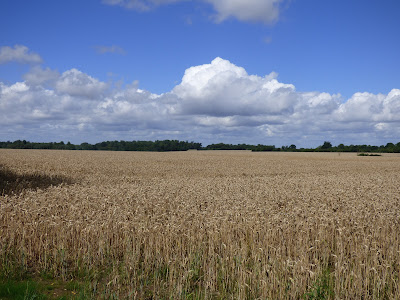 The first of August is celebrated in some parts of the Northern hemisphere as Lammas or Loaf Mass. This is when the first loaf of bread made from the first wheat harvested is blessed in a church service.
It would have been a public holiday when fairs were held and also marked the start of the time commoners were allowed to graze their animals on the stubble fields.

Looks as if it the wheat in the field by us is ready to harvest, but after the rain we've had it's too wet for combines to get on the field for a few days at least. 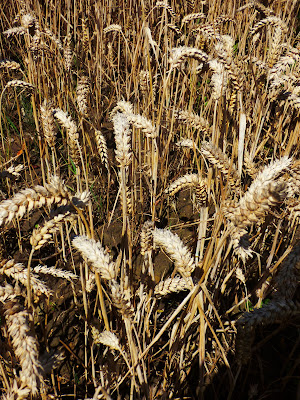 No wonder one country saying in my books says
"Dry August and warm doth harvest no harm".

Most other weather sayings are linked to St. Bartholomew's  day which is the 24th and is 40 days after St Swithin's hence the saying
"All the tears that St. Swithin can cry
St Bartlemy's mantle wipes them dry"
and
"If the 24th August be fair and clear
Then hope for a prosperous Autumn that year"

Before the Romans, in Anglo-Saxon times, August was called Weodmonath - The month of weeds!
We have a few of those!

In some parts of the country St Bartholomew is the Patron Saint of Beekeepers because the 24th was the traditional day to begin the honey harvest.

Back Soon
Sue
And a PS. Yes it's knapweed growing everywhere, thank you everyone. The house with no one in is owned by someone with houses in either London and Sudbury, or France and Sudbury or maybe all three. Apparently they've advertised it for sale once or twice but then taken it off the market again. Now and again someone appears and paints or mends something and the grass is cut by someone else. And that's all we know!

Posted by Sue in Suffolk at 06:00
Email ThisBlogThis!Share to TwitterShare to FacebookShare to Pinterest
Labels: Folklore, Lammas