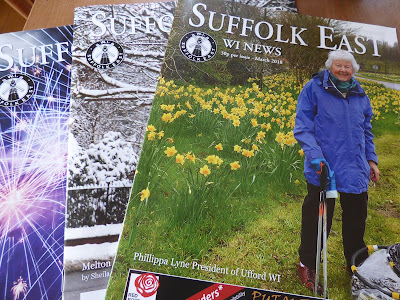 Big WI don't have a meeting in January and small WI went to someone's house to watch a film on DVD......which isn't what I joined WI for. Anyone can watch a DVD, and it wasn't something I wanted to see anyway. (I actually find it a bit annoying that small WI substitute so many other things for what I call proper meetings......film evening, garden party, Christmas meal are all instead of a regular speaker, then when you count in Resolution meeting and AGM they actually only have 6 speakers through the year............ Have to keep my thoughts to myself as sister in law is president!)

So my first WI meeting of 2018 was at big WI on the first Monday in February where a lady came along loaded down with patchwork and quilted items to tell her story of her obsession with these crafts. And blimey she certainly knew her stuff, her patchwork and quilted bed covers were gorgeous.. She's entered competitions all over the country although didn't win with her earliest entries which spurred her on to bigger and better.

What astounded all of us was the boxes of teeny-tiny off cuts, no bigger than a finger nail which she keeps and uses for micro crazy-patchwork on handbags or book covers, bits hardly big enough to see let alone to get under the foot of a sewing machine!

I missed the February meeting of small WI due to feeling poorly and bunged up ears. It was about Suffolk words and dialect which would have been interesting.

Then I missed the March meeting of big WI due to still feeling very grotty - the virus turned into a cough and I didn't want to cough my way through a meeting plus we had thick fog and one thing I really do NOT like driving in is fog at night. The speaker was an auctioneer talking about how they value things for auction, that would have been interesting too.

The Suffolk Serial Murders
Or in police terms................operation Sumac.
Our speaker was retired Police Inspector Karl Smith, who was in charge of the Family Liaison Officers at that time.
It was back in October 2006 that a young sex worker was reported missing. She had last been seen in the 'red-light' district ( actually just 2 roads) of Ipswich, caught on CCTV.
In December 2006 the body of another young sex worker was found by a member of the public in a stream on the outskirts of Ipswich.
Police opened murder investigations and that's when Inspector Smith was involved as he had to send 2 Family Liaison Officers to support the family.
The body of the first victim was soon found in the same brook - further downstream. Both bodies were naked and had been in the water for a while which made the investigation difficult.
Then the body of yet another sex worker was found just 2 days later, but this time in woodland on the edge of Ipswich so forensic experts were able to gather more information.
Just 2 days later the bodies of 2 more young women, also naked were found in woodland  not far away and forensic evidence from one man was found on all 3 bodies.
This man had had DNA taken several years earlier when he had stolen some money from his work place, and it was his DNA found on the victims and also fibres from his clothes. He was also known to frequent the red light area and regularly used prostitutes. Eventually he was found guilty of all five murders and sent to prison for a Full Life Term. He has never admitted to the killings.

One outcome of the murders is that there is no longer a red-light district of Ipswich and much more help for drug addicts and prostitutes. All the girls worked the streets to fund a drug habit - the biggest cause of prostitution and although there are still prostitutes working from houses............it is, after all, The Oldest Profession........ they feel safer and can get help if they want to stop.

It was an interesting talk, not sensationalized, on something most of us remembered all too well as Ipswich was in the media spotlight for weeks.

I'm joining a team representing Small WI for the Suffolk East Federation spring quiz next week, better get my brain in gear!