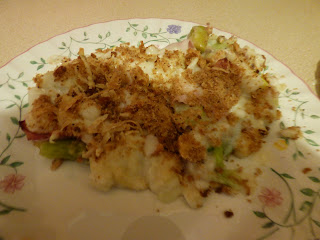 A day after St David's Day - a late recipe!

I don't know where this recipe came from, I've had it in my "repertoire" for years presumably called St Davids Day Bake because of the leeks.

This tastes better than it looks - I promise.
Very simple - leeks sliced and cooked then put in baking dish with pieces of ham. Thick white sauce over the leeks and ham then dried breadcrumbs and grated cheese over the top.

Pop in the oven until hot right through.

Serve up with mashed spuds and veg. I've also often made this into a pasta, ham and leek bake too.

We had a phone call on Wednesday to ask if Col could go to Addenbrookes for his blood test on Thursday instead of Friday because Friday had been over booked. He said we would try but it depended on the weather.  There was no more snow overnight so off we headed early yesterday morning, food packed and I put my walking boots in too.......just in case.
The problem was the wind, it was taking the snow off the fields and dumping it on the roads where there were no hedges to stop it, so between our home and the main A road there was already a build up in several places. We got to the A140 OK and then came to a halt in a queue less than a mile down the road. Nothing coming the other way so obviously road blocked by something. Just 4 miles from home and wondering if there would be more problems over the next 60 miles and if we would get home down the little roads later, Col decided to do an about turn, we got halfway home and came up against a delivery van stuck in a snow drift. Luckily we could back up and some men in another van coming the other way got out and pushed the delivery van backwards and we were able to get passed where they gave us a shove through the drift. We got home 10 minutes later pushing through several small drifts on the way. Phew!
Luckily Col has enough tablets until next week but he really should have had the blood test and Hickman line flushed but what can you do if you can't get there? We are forecast more snow today so no journeys out again. They want us to go at the weekend .......we'll have to hope it stops snowing and blowing! For the last 10+ years we've had a 4 wheel drive and never needed it in snow and now we don't have it we have the weather for it............. although even a 4 x 4 wouldn't get through a traffic jam on the main road!

Hello, Hello and Hello to lots more people who are following. Hope you enjoy reading.

Posted by Sue in Suffolk at 06:00
Email ThisBlogThis!Share to TwitterShare to FacebookShare to Pinterest
Labels: Recipes, Weather