In 1992 we took a Bay tree in a pot to the smallholding and planted it in the middle of what would later become the herb garden. 15+ years later and after trimming it back a few times it was still huge, cutting out light from the kitchen, living room,herb garden and poly-tunnel........... there was no choice but to cut it right down and pull out the roots.

A  few years  before that I'd had  good success with cuttings from the tree and had about a dozen small trees in little pots which kept growing nicely until they were big enough to sell at the gate. But did I keep one for us? Surely I must have done, but is the tree we took to Ipswich and then brought here in a pot as old as that? and if not where did I get it? I really can't remember. 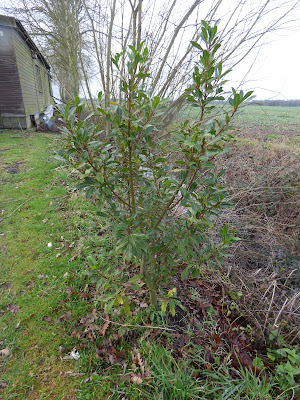 Just before we left Ipswich the bay in a pot got blown over and the big pot broke so when we got here planting it out was one of the first things we did. We put it on the edge of the ditch and hope it will grow as big as the one at the smallholding was because it will then give us a bit more shelter from the wicked North West wind that blows in across the field.
It shot up another foot last year and survived the snow last week, it's over 5 feet tall now.

Bay leaves are easy to dry and I use them to flavour things like mince when it's being cooked up for a bolog sauce or to make a lasagne. I also use them when simmering the milk to make a bread sauce.

Back Tomorrow
Sue
Posted by Sue in Suffolk at 06:00
Email ThisBlogThis!Share to TwitterShare to FacebookShare to Pinterest