Reading From My Shelves Again

Ran out of library books again, so it's back to my bookshelves. 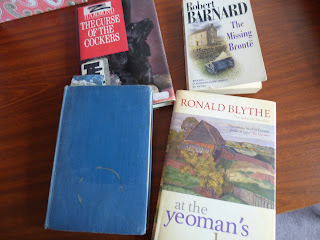 Two crime fiction that have been on my shelves for years
Robert Barnard - The Missing Bronte.  (Published 1983) Short crime novel by prolific author. Very dated .
Gerald Hammond - The Curse of the Cockers .(Published 1993). A short book set in Scotland in the world of gundogs and their training by a prolific author, now slightly dated.

A non- fiction book found more recently, can't remember where.......must have been one of the book sales
Ronald Blythe - At The Yeoman's House. ( Published 2011) A short book, a glimpse at the history of the Author's house 'Bottengoms Farm' situated on the Suffolk/Essex border.


Then it was like returning to old friends when I decided on another Angela Thirkell..........Love Among The Ruins. I am reading my way through her  village stories, mainly featuring the people from the Big Houses which are  set in the fictional county of Barsetshire. I've not read any for a year or so.
13 of the earlier titles in the series have been reprinted by Virago Modern Classics but now I'm having to read the original tiny print from 1948. 'The Ruins' of the title are the aftermath of WWII when the gentry had moved out of their big houses and were living in the "East Wing" or "The Dower House". Injured war heroes now became teachers at prep schools and old Nannies lived on in genteel retirement.The people in the story had also just survived the coldest winter on record - 1947.
Some people find her books annoying. But I grew up in the 1950s in a small hamlet where half the houses were owned by The Family at The Big House and most of the men in the tied cottages still worked on their estate farms. Our next door neighbour had been a nanny for them at one time too. Not so far removed from Angela Thirkell's books.

The two crime books have gone in the box under the stairs ready for a car boot sale. At the Yeomans House has gone into the Ziffit box and Angela Thirkell will be put back on my shelf.........although I have several of the series there are still 8 that I don't possess.......selling for silly money on Amazon because they've only been reprinted once since the 1940s and that was only in the USA.