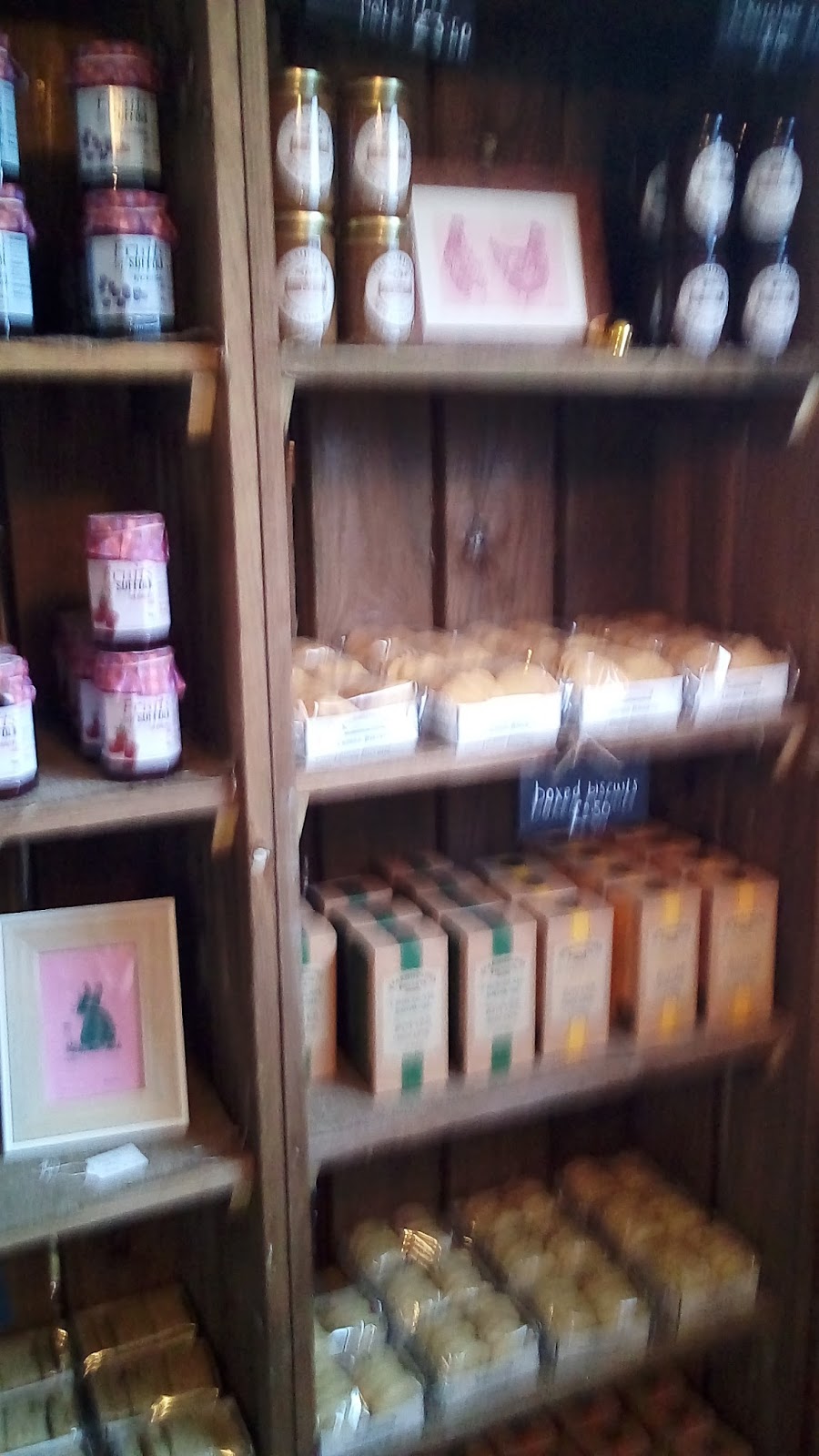 
Last Saturday I visited the Grand Opening of a  new Farm Shop "Hen & Hog" that has opened about 10 minutes away from us.
Very Rustic, and as I thought - jolly expensive.


I sipped a local produced Apple and Elderflower Juice - lovely, and sampled some little bits of Millionaires Shortbread from a local bakery - delicious.

I looked at the Home Raised Very Large Free Range Chickens ........£31! - yes they were LARGE (as big as a small turkey) but £31?, I looked at their home produced Proper Pork Sausages £4 for 6.
To show willing I bought a few small salad potatoes and a head of celery and then went home again. 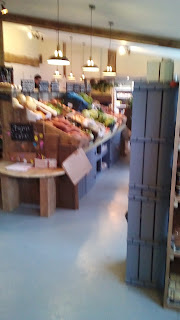 To start with they are only going to be open on Thursdays, Fridays and Saturday mornings, which begs the question - how fresh will the produce be?

The Farm Shop Rhubarb was £5 a Kg but we had our first few sticks of our own lovely pink stems for dinner on Saturday evening. Col made custard and turned them into a rhubarb fool (but without  cream....sadly). The sticks came from one of the new crowns I planted last year, better not pull anymore.
I forgot the  'photo opportunity' but I expect you know what rhubarb looks like!

Sunday, we had Siskins on the bird feeder 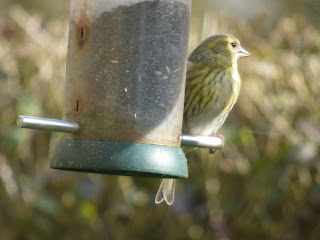 Monday, a bit of sunshine and it was a good day as gardening was started at last. First I weeded the fruit bed. The Gooseberry bushes planted last year look good, the very old blackcurrant is still alive and the old raspberry canes are shooting.

Then I weeded the vegetable bed that's empty apart from a few skinny leeks and finally we folded back the plastic on the other bed and  got the 5 Swift and 5 Home Guard potatoes into the ground. Re- covered them with the  black plastic for a week or two while the weather warms up.
Col got the mower out for the first time this year.

Monday night I headed across to Framlingham High School for the Suffolk-East WI Spring quiz. It was a very enjoyable evening. 26 WI's from East Suffolk were represented and we ended up 12th.
There was a very funny happening at the beginning........The question-reader lady had a microphone through a speaker which, after she had asked just one question, suddenly made strange noises and then shouted "OK Left and over, up,down, right and over." We realised the loud speaker had somehow tuned into an exercise group going on in the next building. It was so funny. There was a delay while someone went round to the exercise class and tried to find out why we were picking up their frequency. But in the end another ordinary microphone was found and we were able to carry on.

Tuesday............back to cold and wet weather and I  was off to the vet with Polly for her annual check-over and cat flu jab. I'm glad it's only 3 miles as she complains loudly all the way.

Wednesday............ and we had been waiting for a call from Addenbrookes as we were expecting Col to be called in for a biopsy before Easter. So on Wednesday morning he gave the Specialist Cancer nurse a ring to find out what was happening. She said she would call back and they were trying for Thursday. I set off to Stowmarket to pay a bill and a bit of shopping and had just arrived in the Asda car park when Col rang me to say they wanted him in.......to stay....... straight away. So I zoomed round Asda and home again where Col had his hospital bag packed and off we went to hospital. They had decided that having him in to stay would ensure they were able to do a biopsy and lots of other tests. He has enlarged Lymph glands and they need to know why and they need to decide what to do next. We had a feeling things were not right so although it was a shock it wasn't a complete surprise. We'd been warned many times that Mantle Cell Non Hodgkin Lymphoma is difficult and aggressive.We are gritting our teeth and carrying on best we can as that's the only thing we can do.

Because of heading off to Cambridge in a rush I forgot a book but found one on the shelves in the waiting room,

it was good to have something to read as I was there 4 hours before they decided that Yes, Colin would definitely be staying. The book was a thriller, not something I would usually read but it kept me occupied. I've read 15 books this month......good grief, just proves how grotty the weather has been and how little housework I do!

On Thursday I made a batch of Hot Cross-less buns. We tried some cheap ones from Asda earlier in the month and found they were doughy and tasteless...... I decided Home Made are best by a long way, but they could do with a bit more spice than the recipe says. I've made a note in the recipe book.

This is VERY sticky to do without a food mixer and dough hook! 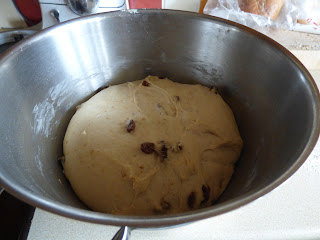 Combine flours, water, milk, yeast, salt and sugar. Add the egg and butter and mix.
Then add dried fruit and spice and knead with dough hook on low speed until smooth.
Cover dough and leave to rise  in a warm place until doubled in size.
Knock back dough and divide into 8 (for very large) or 12  for more normal sized.
Shape into rounds and dust with flour. Cover with a clean tea towel and leave to rise again until double in size.
Preheat oven to 200C/Gas 6. use flour and water mixed in a piping bag to add crosses ( I don't bother)
Bake for 15 to 20 minutes.
Heat jam and water in a cup in the microwave ( or in a saucepan) and brush over to glaze as you take them out of the oven. 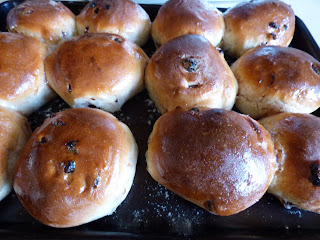 The recipe is stored on the separate recipe page, right at the end.

Thursday afternoon was fine enough to weed and tidy the quarter circle flower bed at last, I hadn't even cut back the dead stuff from last Autumn. It looks so much better after a couple of hours work.
There seem to be some empty spaces so I'll see what I can find at the next car boot sale.

So to today..... Good Friday, the proper day for eating Hot Cross Buns.
In the Christian churches manner of adapting pagan traditions, these buns are descendants of small cakes made at this time of year in celebration of the arrival of spring. Even the cross was there before Christianity -as a symbol of the year divided into four seasons. At one time all bread was marked with a cross - thought to help it rise, but this was frowned upon by the church after the reformation and a cross was reserved only for special holy cakes.

Have a good Good Friday
Back Tomorrow
Sue