March.....and it was my turn for a Penny Pincher Letter. I've mentioned before how a group of us who subscribed to The Penny Pincher Paper kept in touch after the Paper finished.There were 7 of us 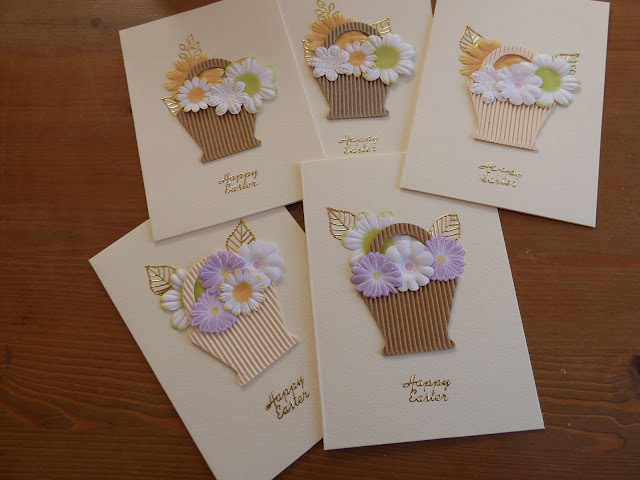 writing originally...........now we are down to  5 taking it in turns to write.
My Penny Pincher Letter is rarely about Penny Pinching because it's all old news but I just write about what's been happening in the last few months, books read, bargains found etc. much the same as the blog...........but without pictures! Luckily 2 of the people who I send letters to don't read the blog so it's new news to them.

Anyway, as Easter is coming up I thought I would make some cards to include in with my letter. I had a quick look through the stash and couldn't find anything that gave me any ideas for cards. So I went on Craft Creations website and did a virtual shop - putting all sorts of things in my basket. When it got to check-out the total came to over £30....WHAT! I went back and took things out of the basket but it still came to over £20......too much for someone with shelves and boxes full of card making stuff. I switched the lap top off and looked through my stash again and at last came up with an idea and made the cards above.

Even though I printed out the letters and got them into envelopes we were then stuck at home due to the snow and  I didn't get them posted off to arrive on the first of the month............ Finally got them posted when the snow went .

We had a very good morning at Addenbrookes yesterday. Col's specialist nurse had organised his usual clinic appointment + CT scan + bone marrow sampling to perfection, we were in and out and roundabout without too many hold ups and home by 2.15pm. And Good News -  we don't have to go to Addenbrookes for 2 weeks and he can have the Hickman line dressing changed in Ipswich next week instead. It will be nice to have a week without that trip along the A14.

Thank you to everyone for hankie comments yesterday. I love to think of boxes of fancy hankies going into charity shops after each Christmas and then selling again before the next Christmas! Hankies and tea towels were the things I was first "allowed" iron when I was young and I do keep a box of soft tissues for visitors, those ones with balm are much kinder on small noses.

Have a good weekend.

Posted by Sue in Suffolk at 06:00
Email ThisBlogThis!Share to TwitterShare to FacebookShare to Pinterest
Labels: Card Making, Penny Pincher Paper