A Doughnut in Diss

Having been all round the 10 charity shops in Stowmarket without finding a single jigsaw puzzle that appealed to me, a trip elsewhere was needed. (And here I need to apologise to two people who have given me jigsaw puzzles recently that were just too complicated for me to consider in my present "lack of patience" mode)
So a trip North to Diss which has just as many charity shops as Stowmarket and maybe even more. I know Diss fairly well - even though it's in Norfolk! because whenever Col was inspecting bridges in the villages of north Suffolk he would drop me off there for a look round and pick me up later.
Into every charity shop  - even found one I didn't know about before -  and at last found a puzzle that looked OK, another by House of Puzzles but not a spot the difference .

But there was a problem, because while searching for a puzzle I needed a coffee and snack in Greggs 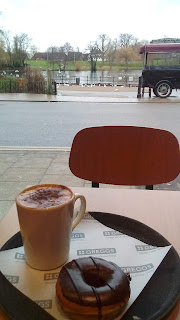 looking out over The Mere. People feed the ducks which attracts every pigeon for miles! 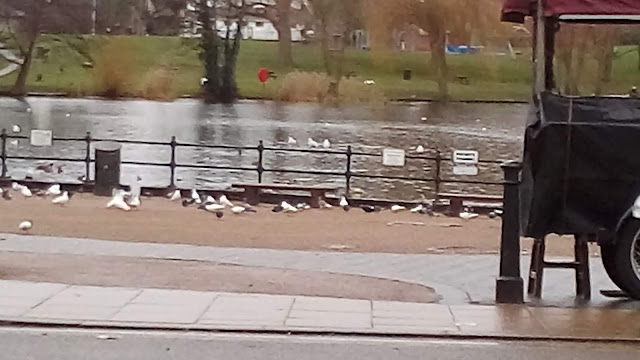 
"The six acre mere - or lake - is a favourite destination for anglers fishing for carp, crucian carp and tench. It was once used as a reservoir and drain by the residents of the market town, but today it's a pleasant place to feed the ducks.
The mere is up to 60 feet deep in places, with forty feet of mud. This natural water feature dates back about 12,000 years to the end of the Ice Age." 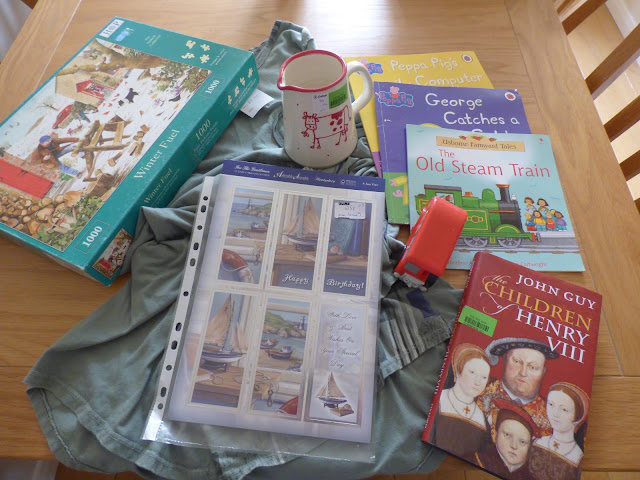 OK, OK...... yes there is another jug (99p) but I haven't bought a jug for months and I said no more craft stuff (25p)but this is a bloke card kit and cards for men are the hardest and of course there are always grandchildren books(3 for £1) and a Bertie Bus (£1)....Willow needs some boys toys I reckon. But why oh why was I tempted by that book.(2.99) Just because of reading C.J. Sansom's Tombland and getting interested in the period again. What I should have done was noted down the title and borrowed it from the library. The only totally sensible buys were another good length tunic top for £3.75 and the jigsaw for £2

It WAS a good morning out until I got within 2 miles from home and might have been going too fast past a B* speed detector van AGAIN. The B* thing was facing the wrong way(checking cars heading out of the 30 mph limit rather than those coming in) just a few metres inside the bit where 50mph goes down to 30mph while going downhill, where it's difficult to slow down without jamming on the brakes. I shall await the postman with fear AGAIN for another 2 weeks.

Posted by Sue in Suffolk at 06:00
Email ThisBlogThis!Share to TwitterShare to FacebookShare to Pinterest
Labels: Charity Shop Finds, Jigsaw Puzzles