Sunday Through to Friday

It's been an age since I made bread.  I eat very little so buy a farmhouse loaf or a multigrain loaf from the in-store bakery and get it sliced by them and pop it in the freezer, taking out just 2 or 3 slices at a time.
But the tomato and herb rolls I used to make are rather good eaten with lots of meals and it was about time to make a batch to freeze.
It was only after the dough had been pummeled by the dough hook that I thought to look at the dates on both flour and yeast.....the flour was BBE April 18 and the Doves yeast which is kept in the fridge was Nov16..........Ooops. Luckily I don't worry to much about dates! The yeast still made the dough rise and the rolls taste fine.

This photo, and you will have to believe me as they were too far away to photograph properly, is  5 hares on the field beside the house. I opened the curtains and saw them straight away so went down for the camera hoping the zoom would be good enough.....but just a bit too far. There were two more off to one side as well.  I was so pleased to see them because there has been a lot of illegal hare-coursing on the other side of the village. Hoped I would see them doing the boxing thing but they just ran around as if they were playing chase. 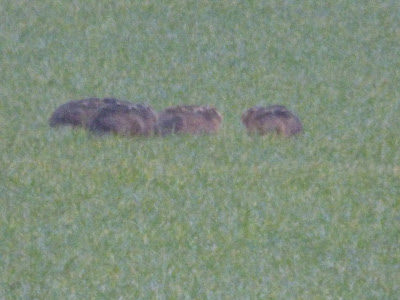 At last we had a bit of sunshine and a few degrees of warmth on Wednesday, it was a treat but still too wet for any garden work. After coming home from visiting Youngest and Florence I washed the car which was filthy from all the mud of the sugar-beet lorries and tractors on all the lanes around about. One problem with driving on narrow lanes is you often have to pull over when you meet something, which usually means into a muddy field gateway, full of huge muddy puddles which spread themselves all over the car.

On Thursday I mixed up a batch of pastry and made 5 chicken and leek pasties (one chicken breast plus  leeks from the garden in a thick white sauce........one to eat and 4  into the freezer). Also made a pastry case and six mince pies.

Very strong winds on Friday, I think they said it was Storm Eric. I sorted through some books for the charity shop, Ziffit won't take them because they are too old for bar codes or ISBN numbers. Also looked at the craft papers.........I have too many.......filling a tall chest of drawers. I put some in the car boot box but it really needs a huge sort out. As it wasn't too cold I did some more clearing up in the workshop.Also remembered to check what compost I had in the greenhouse and there is still half a bag of ericasious  left from the Camellia so I don't need to get any for the blueberries.

This week I have been thankful for

Hope you all have a good weekend

Posted by Sue in Suffolk at 06:00
Email ThisBlogThis!Share to TwitterShare to FacebookShare to Pinterest
Labels: Being Grateful, In the Kitchen, Natural world