Whatever the reason here we are with less than a week to the end of the month already.

I've been tired this week and that's without  swimming (half term makes the 1 hour over 50's session really busy as the pool is used for scuba and canoeing lessons at other normal swimming times). Sometimes having to do all the thinking and organising that used to be done by two people is hard work and I do so much more driving than in the old days and have always found it tiring and even though I've cut  my charity shop stint down to 3½ hours I still came home exhausted...... and it's not even proper work!
So it was good to have Thursday and Friday without taking the car out of the garage.

Seeds have been sown and popped in the electric propagator .........aubergine and peppers which both need a long growing season, then parsley and basil. Hanging  fire a bit for tomatoes and cucumbers.

Compost has been spread onto the bit where I'm putting potatoes. Must work out where everything else is going. Colin always seemed to remember what he had put where but once a bed is cleared I haven't the foggiest.
But, the useful thing about blogging, there's usually a photo somewhere, and there was.................
from last June.............

(Do you remember June, when the sun shone and you could just wander outside in tee-shirt and shorts  without extra layers of clothes?) 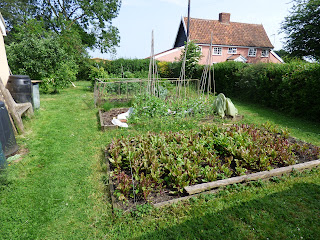 Plans for growing this year include all the above (although fewer potatoes) PLUS Butternut squash and the mini sweetcorn and I'm determined to grow some chard and actually manage to keep it protected from the pheasants and ducks.

This week I have been grateful for

Have a lovely weekend whatever your plans.
Back Monday
Sue