Found a recipe to use up some of the jars of home made marmalade that have been stored since 2017. I don't eat it often because of eating less bread.
Also need to make use of the loaf tin liners that I won at the Bacton Produce show last year. 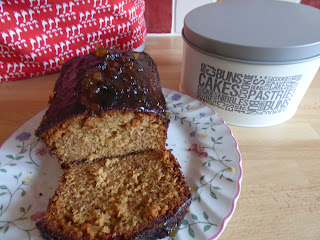 Pre-heat oven to 180C/Gas4/Fanoven160C
Set aside 1 tablespoon of the marmalade in a cup or saucepan
Mix everything else together and  tip into prepared 2lb/1kg loaf tin and smooth the top.
Bake for  1 - 1¼ hours until a skewer comes out clean......... cover the top with foil for the last 15 minutes.
Warm the remaining marmalade in a microwave or on the hob until its soft then brush over the cake while it's still hot.

I'll add the recipe to the separate recipe page

This might be a good cake to make when I have to take cakes to WI.


Many thanks for comments about Thornham Parva church. It's not far from home yet on a road that I would never have used so wouldn't have found it except for this blog. It was such a welcoming little church and the movement sensor lights are an easy idea that other churches could copy.

Welcome to another person clicking the follower button, I'm hoping for 500 by the end of the year!