Before charity shops were the norm jumble sales were the only place for finding secondhand children's books and clothes, so bringing up 2 and then 3 children on a low income I was always in the queue at all the jumble sales around Cotton and Bacton where we used to live.

Now a jolly old jumble sale is a rare treat, so I was very excited to see the signs for a Scout Jumble Sale because our Scout jumbles when I was a Cub Scout leader were always some of the best.

There was a good queue waiting and we all rushed in to look when the doors opened.

I found another House Of Puzzles jigsaw. This will be the last one I do at the moment because the gardening and growing season is fast approaching. 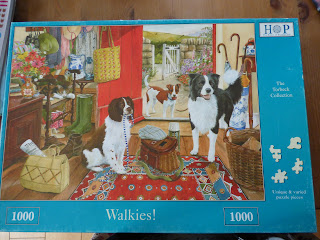 There were loads of books at 3 for  £1 and I got several for the grandchildren and also picked up a few  non fiction in the hope they would be wanted by Ziffit and luckily one was wanted for £1.62 and another for £1.82. Another they didn't want but I'll keep it for a while. Also spotted this Shirley Hughes book which I knew about but hadn't  seen before. 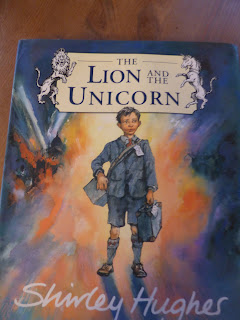 I didn't plough through the tons of clothes, no need to find clothes for grandchildren as they get given loads. I cast an eye over the china and other household stuff but nothing caught my eye.

Hope Eye Scout Group have a Jumble sale in January every year.

Hello and welcome to some more new followers, I still love to see the numbers creeping up and thank you for comments yesterday.


Back Tomorrow
Sue
Posted by Sue in Suffolk at 06:00
Email ThisBlogThis!Share to TwitterShare to FacebookShare to Pinterest
Labels: Jigsaw Puzzles, Jumble Sales