Now in it's 24th year it's the longest running potato day in the country. It's held every February at Stonham Barns (the place not too far from home where I go for the local boot-sale.). Jointly organised by 3 groups............ Ipswich Organic Gardeners; Suffolk Organic Gardeners and Norfolk Organic Gardeners group.
It's quite a tradition now to go and wait in the long queue for the doors to open and then jostling round the tables to find the varieties of choice, which are all laid out in alphabetical order.

I joined the queue quite late for me and only had to stand in the gusty wind for 10 minutes, but at least the sun was shining and discussing it with a lady standing behind me in the queue we decided that there had never been a Potato Day in pouring rain, snow yes but never anything needing an umbrella. There seemed to be a lot more people there than recent years I reckon it's the Brexit Effect!!

This year the tubers were 17p each and  I bought 6 each of 4 different varieties. 2 first earlies........ Swift and Accord, and 2 second earlies Nadine and Charlotte. 6 is enough for the width of the bed I'm using this year. Not bothering with maincrop as I don't eat many potatoes, so I'll just buy a few at a time the rest of the year. I know nothing about Accord so that will be an interesting trial. The others are all ones we've grown often before.

I've put the first earlies out to chit ready for planting next month and the second earlies in the cold porch so they don't start producing shoots too soon. 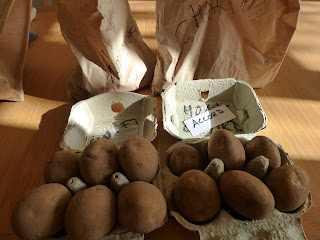 I spoke to two people I knew, one had heard about Colin but the other hadn't. It's always difficult because I never know what to say when people didn't know he had died, they are always embarrassed when they don't need to be which makes me feel embarrassed too!

Anyway, Mid Suffolk District Council had their usual stall and I asked about their free bags and had one of the very last. No money now for giving anything away, they used to be sturdy jute, last year and this year- cloth, - next year nothing! 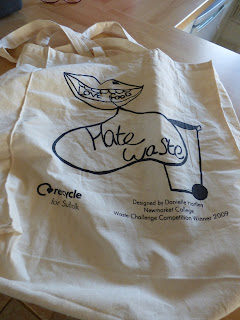 I'd  thought about  doing other stuff on Saturday morning while out but the wind was so strong all I fancied doing was getting home into the warm and watching the rugby. So that's what I did.

Finished a book, started another,  watched rugby and listened to the wind whistling around the chimney.


Posted by Sue in Suffolk at 06:00
Email ThisBlogThis!Share to TwitterShare to FacebookShare to Pinterest
Labels: Local Events, Potatoes