Finished reading Tombland by C.J Sansom at last, it's a massive book.......800 pages and like all the others in the series it's taught me more about the period. This is the 7th in the series about lawyer Matthew Shardlake who is now working for Henry VIII's daughter Lady Elizabeth.

The year is 1549, two years after the death of Henry VIII and England is slipping into chaos. 11 year old Edward is king with his uncle Edward Seymour as Protector ruling the country. Matthew Shardlake travels to Norfolk to find out about the death of Edith Boleyn, a distant relative of Elizabeth. But while there East Anglia becomes the hub of the rebellions against the rich landowners who are enclosing land for sheep. The rebels led by William Kett take over  England's second largest city of  Norwich (Tombland is an area of Norwich between the Cathedral and Castle) and soon Matthew and his assistant Nicholas are caught up in the battles. Meeting up with Jack Barak, Mathews former assistant they have to decide which side to take to survive.

At the end of the book are several pages about the historical sources he uses for this book and information of where his book uses authors invention to fill the gaps where nothing is known.

A really good story and because there has always been a big gap between each of his books (the first was written in 2001) I've collected them as they've turned up secondhand and  read the last one to remind me of the story before the next one comes to me from the library. So it was a pleasant surprise to find Tombland sitting on the shelves in one of the Stowmarket charity shops for £1.50 (sadly not our charity shop so no volunteers discount!). I hope he writes number 8 in the next few years. And now I have them all I can read them all again one day....if I ever run out of library books. 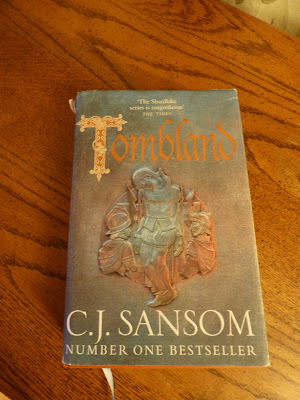 Thank you to everyone for shoe cleaning memories after yesterdays mundane post. It was interesting to see that it was often the Dad of the house who cleaned shoes in the past. That was true in our house too when I was young, but it always ended up being my job once Col and I married! I'd forgotten that I used to have a shoe cleaning caddy - bright orange, like the brush set, with a carrying handle. So funny that even shoe brushes and caddy matched my first 1970's orange kitchen!