Not the most riveting post you will ever see in blogland!

I got fed up with the applicators always falling to bits long before the thing was empty, on those 'modern' shoe polish bottles, so went back to a tin of the old fashioned proper stuff . But why is it called  Kiwi? 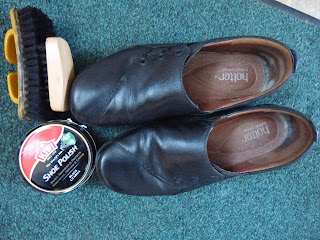 Kiwi is the brand name of a shoe polish, first launched and sold in Australia in 1906 and as of 2005 sold in almost 180 countries. Previously owned by the Sara Lee Corporation since 1984, it was sold in 2011 S.C.Johnson. It is the dominant shoe polish in some countries, including the United Kingdom and the United States, where it has about two-thirds of the market. In Malaysia Kiwi has become such a household brand for shoe polish that the word "kiwi" has been genericized  into a verb in the Malay Language, meaning "to polish one's shoes".
The polish was developed in Australia by William Ramsey  who named it Kiwi after the flightless bird endemic to New Zealand, the home country of his wife, Annie Elizabeth Meek Ramsay. Its success in Australia expanded overseas when it was adopted by both the British and American armies in World War I.

My Hotter shoes are doing well, this is their third winter, the kiwi should help. I have very few pairs of shoes compared to most of the people I see in those fitted wardrobe ads on TV! 2 pairs of black shoes, 1 pair of summer shoes and an old pair for here, wellies, walking boots, crocs and my Hotter slip-ons for indoors.
The shoe polishing brush, helpfully labelled "I polish"  is doing well too it was one of the things I acquired for my "bottom drawer" way back in 1974. Wish I knew where in the last 45 years I lost the handy stiff brush that said "I remove mud".

Back Tomorrow
Sue
Posted by Sue in Suffolk at 06:00
Email ThisBlogThis!Share to TwitterShare to FacebookShare to Pinterest
Labels: House and Home