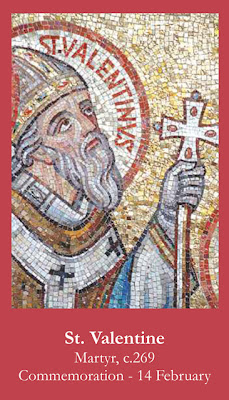 There was probably more than one St Valentine, but one of them was a 3C martyr and not much is known about him but there is an undisputed history of people celebrating on this day going back 600 years. Chaucer wrote, sometime between 1376 and 1382, a poem telling how birds choose their mates on St Valentines Day each year and this day was supposed to be the first day of spring in many places. Later the link was made to people choosing a mate on this day too but  no real connection with  St Valentine.
Valentine cards appeared in the 19C and were elaborate or romantic, comic or rude. Rude ones sent as a joke among the working classes were the cause of the celebration of this day going out of fashion through Victorian times, coming back into popular fashion in the second half of the 20th century. Now  the cards are in the shops just after Christmas and everything is sold, from teddies to cakes, with a heart featuring on it and every shop has a Valentine window and florists charge a fortune for roses (cynical ........ moi?).

I found just a couple of weather sayings in my books


To Saint Valentine the spring is a neighbour

Valentine's Day breaks the back of winter

Back Tomorrow
Sue
PS. Thank you to all new followers, what a nice surprise.