Well, not quite everything was tat but some things had been at the back of old sheds for a VERY long time. It was the first of 3 Rural Bygones sales at Campsea Ashe Auction Rooms this year

I went to have a look on Saturday because on the online catalogue I'd seen an old enamel Flour bin and one or two other interesting things. Also thought my Ipswich cousin might have been there but he wasn't.

The flour bin was teeny, not even tall enough for a 1½ kg bag of flour! 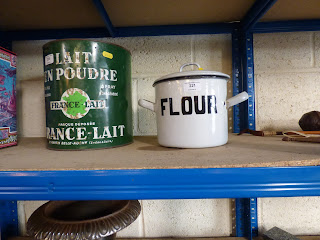 A nice collection of stoneware. The jugs and jelly moulds were the best pieces. 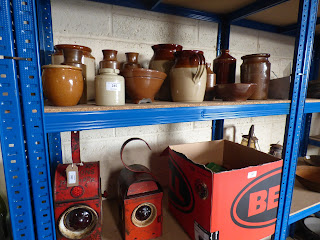 I'd also been interested in this bagatelle board but it wasn't as big as it looked on the catalogue and the nails were all rusty. 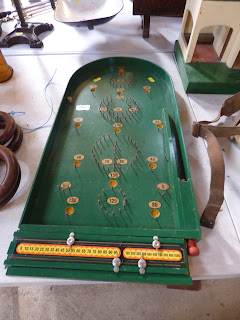 Some blue and white stripe Cornish tableware. My mum once had a whole set of this (she also had sets of about 4 other dinner/tea sets!  goodness knows why) 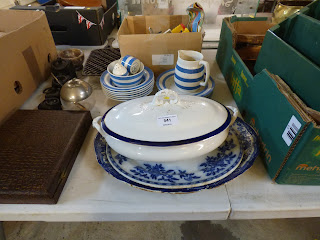 I reckon this was one of the best things in the sale. A 19th century elm gingerbread mould depicting a bishop or a saint on horseback.  I don't know what it went for but I know it was much more than the £20 - £40 estimate because online bidding was higher than that before the sale even started.
(poor photo because it was in the counter cabinet) 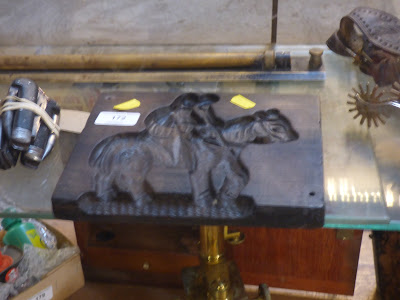 The other Lots I looked at were a box of country crafts books, might have been able to sell one or two on Ziffit but not the rest and a dolls pram which was completely rusty and the hood all torn.

The beginning of the sale had some old enamel signs - and one or two including a Robertsons Golly and an RAC sign went for several £100 each - I know they are popular collectors items but can't see the attraction myself.
I decided not to hang around to see what other things sold for because it was absolutely freezing in the big auction building, while outside the sun was shining gloriously.

So home for more gardening. Their next Rural bygones sale is in July - I might go and look......I might not.

Thank you for all the comments yesterday

Posted by Sue in Suffolk at 06:00
Email ThisBlogThis!Share to TwitterShare to FacebookShare to Pinterest
Labels: Local Events, Rural Bygones Sale