A Week Off The Blog

It's been quite strange not to look at the lap top  to make sure the scheduled post has posted itself but as it was such a quiet, HOT week I certainly wouldn't have had much to write about. I  spent lots of time indoors,  all windows open and curtains closed. Mainly reading, with one eye on the lovely scenery of the Tour De France............and wasn't it weird that The Tour was stopped on Friday due to snow!(not weird that it was stopped, that was only sensible but weird to see snow while the rest of Europe wilted)

The first truss of Big Mama tomatoes really are Big but as the plant grows it seems that the later trusses produce smaller tomatoes, the first to ripen were skinned and popped into the freezer on Monday......two tomatoes weighed half a pound............ the start of collecting enough to make my favourite chutney but they'll be plenty to use fresh once they get going. The teeny weeny Cascade in the baskets have a really lovely flavour, they are turning  red a few at a time too.

Before the heat got going I used the small mower to do between the veg. beds and other bits in areas that can't be got at with the ride-on. Also cut the tops off the potatoes and weeded the asparagus bed. After that it was too hot to garden.

Swimming was a joy early on Tuesday morning because it was so quiet, some schools had broken up and others hadn't but the pool summer holiday schedule hadn't started so it was a sort of in-between day.
Amazing lightning in the early hours of Wednesday morning, there was no thunder to start with which was quite odd. Then just a little rain, still hot for sleeping which made for a horrible night. I couldn't be bothered to get up early enough to head to the midweek car boot.
But did head out later to the dentist. He can do a better filling but not before first week of September, due to holidays - it's a one man set-up. So I just have to be careful for 6 weeks. No pain except that which will be inflicted on my bank balance!

Thursday morning dawned with a nice breeze, which then turned into  hairdryer heat! The kitchen is coolish in the morning so I made a few scones and put the breadmaker on before my sister came round for a coffee which was good. I tried to give her beans and she tried to give me beans! but I was able to give her aubergines and a cucumber and she gave me sweet-peas.
More thunder storms in the evening, but with hardly any rain, I turned off the TV and watched the storm from the dark room.

Friday morning and 10 minutes of rain but also 10 degrees cooler, supposedly....... although it didn't feel like it when I picked and blanched the mange-tout peas for the freezer. Not as many as last year which is probably good as I still have a bag of last years in the freezer.


The heat has benefited the butterflies, they are everywhere now. I counted 6 Peacocks  at once on the Buddleia and managed to get a photo just before standing still in the sun made me wilt. 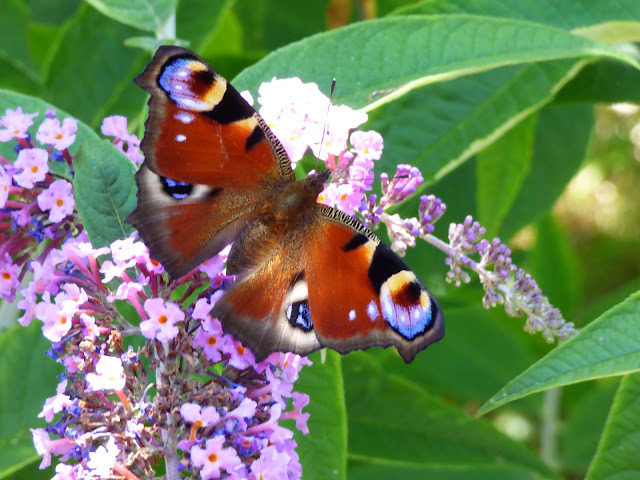 This week I'm grateful for.................
The freedom to stay out of the heat quietly reading a book.
Lots of books to choose from
Not having to do much cooking


Have a good weekend everyone, the forecast here for the weekend will be cooler but showery ...........perhaps no car boot sales then.....bother!
I'll be back Monday.
Sue

Posted by Sue in Suffolk at 06:00
Email ThisBlogThis!Share to TwitterShare to FacebookShare to Pinterest
Labels: Being Grateful, Natural world