Bit of a different WI meeting for Big WI this month. We all met up along the A140 at   Suffolk Farmhouse Cheeses.


Jason and Katherine started their business making cheese with milk from their Pedigree Guernsey  cows in 2004 but it was 2009 before they were able to buy this farm and have everything in one place.

We had a look round the farm. Saw the cows and the robotic milking machine - installed in 2017 and Jason told us  about the care of their milking herd, their feeding regime, health checking (Katherine is a vet- handy!) and how the computer chips on collars around their neck works just like a fit-bit relaying information to his phone day and night. (Not a new concept for me because at the smallholding we lived just a mile from one of the first farms in Suffolk to install a robotic milking parlour, although they retired and sold up before we moved away). By using a robot machine the cows can wander out to the fields, in and out of the barn and then through the milking parlour whenever they like day and night.The machine recognises each cow and automatically washes the teats and fits the vacuum pump. If the cow has decided to go through the robot machine too soon after it's last milking then the gates open again, the cow gets no feed and soon wanders off........clever stuff.

They also keep a Hereford bull. Jason uses Artificial Insemination for the Dairy herd to get pure bred cows - the females are added to the herd and the males kept for veal. But if A.I. doesn't work on some cows he lets them run with the bull to produce a cross breed calf which can be grown on and sold as beef.
Their first cheese they produced was called Suffolk Gold, quickly followed by Suffolk Blue. Then they started making a Suffolk Brie and just in the last few weeks now also a Suffolk Blue Brie.
As well as the cows he also keeps a few pigs, which are fed partly on the whey left from the cheesemaking and they send them off to a local butcher who makes sausages of all sorts  plus gammon and bacon.
The couple have a farm shop which is open through the week to sell their cheese, pork products, veal and beef but they also have a self-service vending machine to sell their fresh pasteurized milk. So you can go almost any time to buy milk and eggs.
Jason was very excited to tell us that they are in the process of importing butter and cream making machines from Eastern Europe so that very soon they will be adding fresh Guernsey Butter and Cream to the farm shop. They will be one of only 2 farms in East Suffolk making their own butter to sell and he said the other farm's butter is Very Expensive.

After looking round we all crowded into the shop for a cheese tasting. I've had their cheese several times before and Son and DiL had cheeses from them for their wedding and they are all delicious. I couldn't pick a favourite when he asked us to vote.

We then had a chance to look in the freezers and chillers to buy some produce but of course they are the price we should be paying for our food rather than the knock down prices supermarkets are able to negotiate with farmers, so seem expensive. I bought a chunk of Suffolk Blue which I'll enjoy. 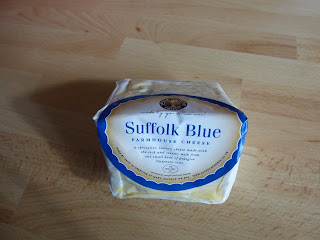