Brother in Law came last Sunday and between us we got all hedges cut and he did all the big strimming. Everywhere is looking so tidy, should be OK for another year, especially now I can keep things under control with my small strimmer and the electric hedge cutter (in short bursts). Andrew borrowed a massive petrol hedge cutter with a swivel head and even did on top of the hedge between garden and field.
Unfortunately I didn't notice until too late that he had zoomed the big petrol strimmer under the shrubs out the front and demolished the bee-orchids that I'd so carefully avoided with my small strimmer last week! There are two left which hopefully will seed themselves.

Now I have a massive heap of hedge cuttings for a bonfire.

The swimming pool was very busy when I got in just after 8am and I thought " this won't be fun" but several people soon left to head off to work and for most of my time there were only 4 other people swimming.

Didn't see Youngest and Florence as she needed her day off work to catch up and rest plus there was a road closure which would have meant a long detour............... I defrosted the little freezer instead, and cleaned windows after popping out to the mid-week boot sale.................where almost everything I found came from one van load of house clearance stuff, boxes and boxes full of random things all chucked in together. The Christmas crackers, the pack of fly swats, the Ladybird fairy-tale books and the pack of RNLI note-cards set me back a total of £3.50. The Sudoku book was 10p and  the Twelve Days of Christmas fold out book was 50p - another one for the advent book parcels. Someone had several of the House Of Puzzles Jigsaws  but they wanted £4 each and as I've got two ready for Autumn/Winter already (and charity shops sell them for less) I left them on the table. 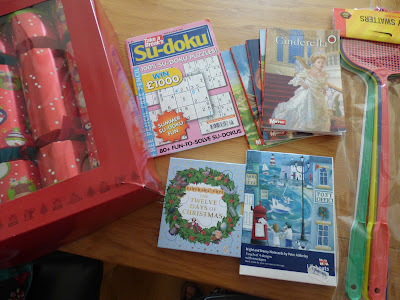 Looking through these mixed boxes cleared from some deceased persons house is quite a wake-up call to the future and no wonder many of us are trying to de-clutter now rather than later. I spoke to the lady running this clearance stall and she said the boxes had all been from one house cleared just the day before ..........4 people taking 14 hours with dozens of boxes, they had simply loaded everything into their big van and brought it along. She was sorting through boxes as we talked and came across a butter dish........... still with the butter in it!

It got really sunny and hot by 9.15 and I headed off back home where it was annoyingly cloudy on and off all day.

Then there was the WI party which I enjoyed followed by a lazy Friday.

I've watched tennis whenever possible and looked for recipes for using aubergines - they are doing rather too well, I gave three away...........and  three cucumbers.


Have a good weekend
Back Monday
Sue

Posted by Sue in Suffolk at 06:00
Email ThisBlogThis!Share to TwitterShare to FacebookShare to Pinterest
Labels: Being Grateful, Car Boot Bargains