Weeks after the first cucumbers and aubergines I have red tomatoes at last...........it can't be lack of warmth - the greenhouse is always several degrees warmer than outside but I do have rather too many plants with too many leaves keeping out the light.

The Very Large tomato is called Big Mama, shaped like a large plum type but bigger than San Marzano which is what I usually grow for making chutneys. The small plum ones are Sun Grape - exactly the same size as the tomatoes in a pack of mini-plum from a supermarket. The teeny tomato - the size of a sultana - is from the outdoor Cascade plants that are in baskets on the garage wall. 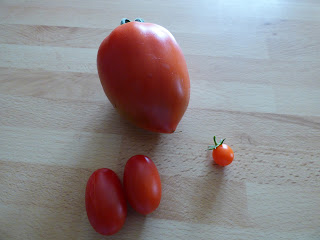 After I'd sown three different sorts of red tomato seed I decided to try a yellow fruiting variety, Ildi, thinking they would fruit earlier as it wouldn't take so long for them to ripen. Really I was too late with that plan and the plants squashed into the greenhouse got too lanky before they even produced a truss of flowers. I passed on a couple of plants to BiL - he puts tomatoes in the ground in his greenhouse which has glass right down to the ground- but his were the same.

I've now taken loads of leaves off the plants so hopefully they'll ripen better. Once they get going I'll skin the monster toms and add them to a bag in the freezer until I've got enough for Red Hot Relish. Then once the 'pointy' peppers and chilli peppers are red, that will be something else to make for the hampers........and for me.

Thank you everyone for the congrats on the Nana news, it's happy news but tinged with sadness because that new baby will be the first of the four grandchildren not able to have their photo taken with Colin. We have a couple of  Willow with him as she was born a month before he died.

Welcome to some new followers - hope you enjoy reading.

Posted by Sue in Suffolk at 06:00
Email ThisBlogThis!Share to TwitterShare to FacebookShare to Pinterest
Labels: Tomatoes