Reading From My Shelves

The Amazon description says...........Dan Boothby had been drifting for more than twenty years, without the pontoons of family, friends or a steady occupation. He was looking for but never finding the perfect place to land. Finally, unexpectedly, an opportunity presented itself. After a lifelong obsession with Gavin Maxwell's Ring of Bright Water trilogy, Boothby was given the chance to move to Maxwell's former home, a tiny island on the western seaboard of the Highlands of Scotland.
Island of Dreams is about Boothby's time living there, and about the natural and human history that surrounded him; it's about the people he meets and the stories they tell, and about his engagement with this remote landscape, including the otters that inhabit it. Interspersed with Boothby's own story is a quest to better understand the mysterious Gavin Maxwell.
Beautifully written and frequently leavened with a dry wit, Island of Dreams is a charming celebration of the particularities of place.

Seems Gavin Maxwell was a very strange bloke who always had teenage boys living with him on his island to look after the otters!

The next off my shelves was one of Angela Thirkell's Barsetshire Series. It's been ages since I read one..........I'm gradually collecting and reading them all............... Seven have been on my Amazon wish list for years and the prices never drop.........sadly.
Starting in the 1930s, she re-created the English county of Barsetshire (After Trollope) and filled it with intermarried families who get through World War II and the changes that challenged their old way of life.
County Chronicle dates from 1950,  my copy was one of a bundle bought from ebay several years ago,  it's a very old Book Club Edition. In this story it's five years after the war and rationing goes on and on, but there are still grand (though impoverished) country seats, weddings and private schools and old family retainers. People from many of the earlier books re-appear and I had to fetch my copy of "Angela Thirkells World" to remember how the characters are related. 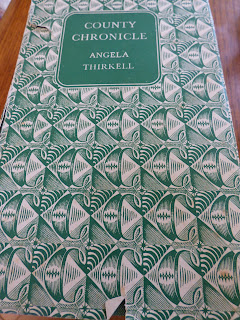 Some people don't like them at all, they are full of genteel, snobbish characters. Lots of upper/middle/lower class distinction and, in this one,  a dislike of Them ......... the Labour government after the war. But how can  anyone fail to enjoy an author who names one of her villages 'Winter Overcotes'!
The Angela Thirkell Society in the States have published a map showing all the places in her imaginary county...........that might be handy.

And Finally when the heat of the week turned into a wet weekend, I pulled this from my shelves to re-read before I tackle the recent follow-up 'Go set a watchman'. 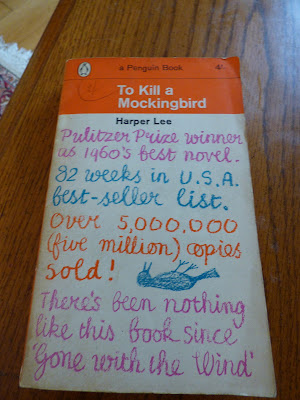 Surely the ultimate in recycling...........this has the original price of 4 shillings, then on the front in pen is 2 shillings and on the inside in pencil is 50p .......must have been from a second hand book sale somewhere. It's only been on my shelf for about 5 years when I belatedly read it for the first time.

Posted by Sue in Suffolk at 06:00
Email ThisBlogThis!Share to TwitterShare to FacebookShare to Pinterest
Labels: Book Reviews, My Books