The end of the week again and what have I been doing?  Not a Lot is the answer although I was forced to do one thing which I had been putting off...................sorting out the hosepipe.

When I tried to unroll the hosepipe to rinse off the car after giving it a much needed clean I discovered the whole thing was jammed up around the back of the massive heavy roll thing which is fixed to the wall. Last time I wound it up a loop of the hose must have fell down over the back and somehow got stuck. The pipe is so long I've never needed to unroll the whole thing and when I did get it un-jammed and pulled it right out I found out another reason the water pressure is so low out the end of the hose. The hosepipe was really  long..........it went on and on and on. So I did what I've mean meaning to do for 2 years ........cut the darn thing in half. 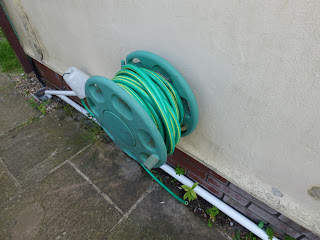 Still long enough to get where needed and now much easier to lift the thing off for winter storage.


Surely I'm not the only person who can't remember where they were when man landed on the moon. According to all the TV coverage it's one of the great events of history and "everyone remembers where they watched it". Haven't a clue and still not bothered.

Had to have three trips to the health centre, one to get new ID for logging into their new computer system for repeat prescriptions, then when I did get online it came up with needing a prescription review so back again to see the nurse just to say Yes I am still taking these things and Yes I do still need them. And then blow me they didn't have one of the things in stock so back AGAIN to collect. Thought I might as well combine one of those journeys with the pensioners cheap meal at the Fish and chip shop in the same village. I drove straight by the chip shop on the other two trips!

The week was going well but now I need a trip to the  blinkin' dentist sometime soon as the tooth he rebuilt with a filling last year has disintegrated again, think I swallowed part of it!  He said it would  break sooner or later - might have to have it out although how I don't know as there's not much left probably be too late for capping now........oh b****r, more expense. At least it doesn't hurt as it's a tooth with no roots.

Apologies to everyone who had a advert jingle for chocolate stuck in their heads all day yesterday! and thanks for comments.


This week I'm grateful for................
News of another grandchild on the way
Feeling better than last week
Good library books

Back Monday
Sue
Posted by Sue in Suffolk at 06:00
Email ThisBlogThis!Share to TwitterShare to FacebookShare to Pinterest
Labels: Being Grateful