Entering Things In The Show

For as many years as possible I've been entering vegetables and cakes in Produce shows.
It all started way back in the early 1970s when I was with someone whose Dad and Uncle were  really into growing and showing. Bacton show back then was just a produce show in a school hall with childrens races on the playing field. Cliff and Bill would vie with each other and a few other men from the village for the big overall prize - The Presidents Challenge Cup.
The day before the show would be busy with harvesting produce, cleaning, polishing and preparing. There was a special way to show onions, tops bound with garden string and shallots all neatly stood in a small box full of sand. The tray of vegetables would be lined with parsley before displaying a mixture of the best vegetables. It was tense stuff.! I didn't enter anything back then but the memories of rushing into the school hall to see if my then Father-in-law had won stayed with me. 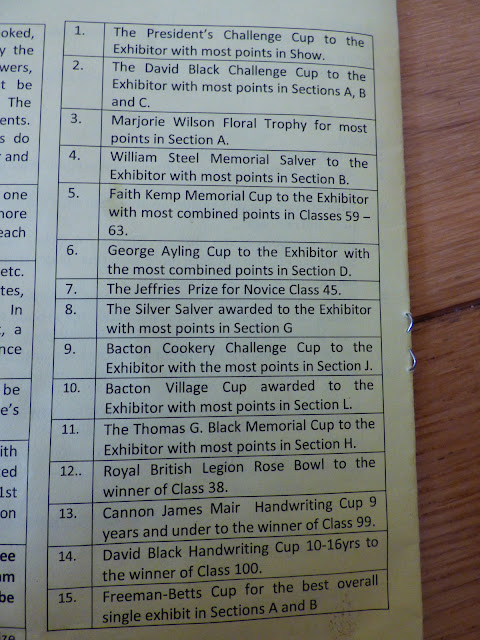 Fast forward to the 1980's, after 8 years away from the village during which Cliff's son and I had divorced and I'd married Colin and we moved back to that village and were there for 10 years and I often  entered something in the show, especially as the children got older and I had more time.

Onto 1992 and I was very pleased to find that the smallholding we moved to near the coast was in a village that also had a Flower and Produce show and before long I was entering as much as I had time to bake and harvest. Sometimes Col would help by having the Friday off to wash up all the baking utensils as I used them. The children entered things in the Childrens sections, painting stones, garden on a plate and similar things and we would all rush down to the village hall to see if  we had won anything.......... The excitement of seeing the red FIRST sticker on the entry card!
I used my experience to write a piece for the Suffolk Smallholder Society newsletter all about entering shows......the unseen rules like calyxes must be on tomatoes and vegetables entered in a class should all be the same size.

So here I am after all these years, back in Mid Suffolk less than 8 miles from that first village where it all started and where we lived and where I was Cub Scout Leader for so many years and where I go to Big WI. I asked Colin's brother to watch out and save  the schedule which comes with  his Parish Magazine in May or June and then I'm ready to enter again.

12 classes entered this year (9 last year)  including a "chequered sponge cake" which involved covering a sponge with chocolate buttercream and rolling it in toasted coconut! You should have see the mess in the kitchen! 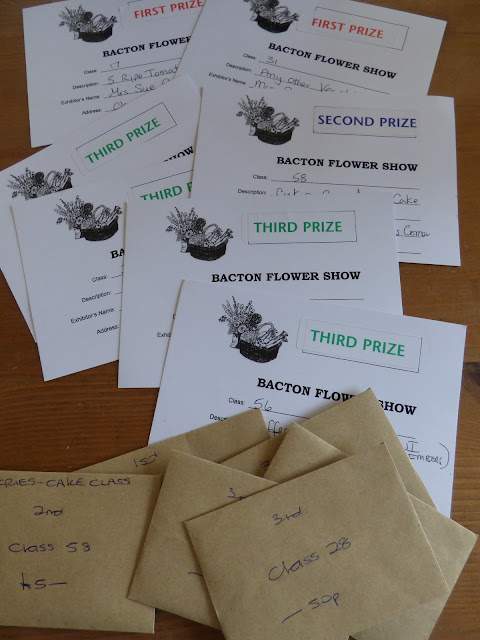 2 Firsts, 1 second and 4 thirds.
Even the teeny courgettes got a 3rd!

The one I was most pleased with was my second prize in the class for a Cut and Come Again Cake, not just because it was a special sponsored prize and won me a Fiver but due to the big prize money and easy recipe there were loads of entries. A 2nd prize out of 15 entries is almost better than a first out of 5 entries!


More photos from the show tomorrow.

Posted by Sue in Suffolk at 06:00
Email ThisBlogThis!Share to TwitterShare to FacebookShare to Pinterest
Labels: Bacton Fayre, Local Events, Memories