Getting Rid of More Stuff

Weather forecast was much improved for Sunday so on Saturday I loaded the car and headed off to the local boot sale early on Sunday morning.

It was a VERY slow morning, nobody wanted to spend more than £1 and some folk wouldn't even spend that much! I'm beginning to think we have too many boot sales in the area, there's too much choice. 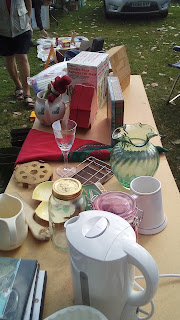 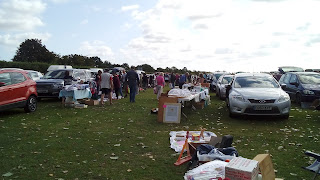 I took a couple of crates of small tools etc from the workshop........ lots of men looked but several told me which things were broken or no good - so heavens knows why Colin had kept so much old rubbish. One man told me he sells small tools, like pliers, for 20p each on his stall and wasn't even interested in taking a box full for a couple of pounds!

In total I took £67.50p less the £5 pitch fee so £62.50p profit. I brought home some things which I'll take to the lady who collects everything for the WI boot sale which is next weekend. Some will go to a charity shop, one or two things went in the dustbin and a few others back in the cupboard.

That was my second and final boot sale of the year, the third one I've done on my own and that's enough! I have no idea what I'm going to do with all the buckets of nails, screws and other random bits that are still in the workshop - obviously no point in hauling them anywhere to sell except maybe the auction yard.

One interesting thing happened.............a lady in lovely 1940's type clothes, twin girls and the dad walked by and I thought "hey, I know who that is!" so I leapt out from behind my table (probably making them jump!)  and said "Hello! You used to write a blog?" and yes I was right it was Michelle and her family from Lincolnshire and 'Remembering The Old Ways blog'. Still posting on Instagram she said, but busy with home schooling and just visiting Suffolk where their son now lives.